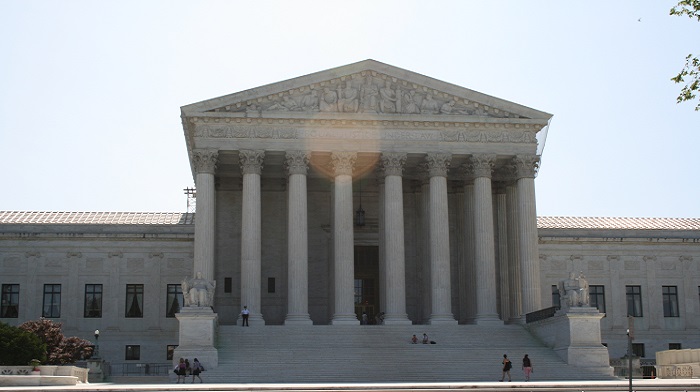 The decision, described by CNN as a “major defeat” for the Biden administration’s climate change agenda, limits the power of the executive branch to implement environmental regulations on its own.

“Capping carbon dioxide emissions at a level that will force a nationwide transition away from the use of coal to generate electricity may be a sensible ‘solution to the crisis of the day,’” Roberts explained.

But, he added, “A decision of such magnitude and consequence rests with Congress itself, or an agency acting pursuant to a clear delegation from that representative body.”

Just kidding, they went to the ol’ thesaurus and looked up synonyms for ‘extreme’ and ‘doom.’

MSNBC is treating today’s conservative Supreme Court decision reining in the EPA as the bureaucratic version of the Roe decision: “Dangerous,” “scary,” “extreme,” “a loss for the world.” pic.twitter.com/g2sytLH7hz

Representative Alexandria Ocasio-Cortez (D-NY) called the ruling “catastrophic,” a term we know she had to look up because it has three syllables more than most words she uses.

She suggested ‘doing away’ with the Supreme Court “for the sake of the planet.”

Catastrophic. A filibuster carveout is not enough. We need to reform or do away with the whole thing, for the sake of the planet. https://t.co/if8PIbfs42

Honestly, we’re not certain why she’s so worried. According to her own calculations – in which she likely utilized a solar-powered calculator, an abacus, and all her fingers and little piggies – the world is going to end in 2031.

She’s not going to have to worry about the silly ol’ Supreme Court after that.

“Millennials and people, you know, Gen Z and all these folks that will come after us are looking up and we’re like: ‘The world is gonna end in 12 years if we don’t address climate change and your biggest issue is how are we gonna pay for it?’” she said during an interview at an event in New York City in 2019.

Um, like, Yea. the world is going to end in 12 years pic.twitter.com/ywDEno69Wf

The Planet is on🔥

Others swiftly followed suit by metaphorically lighting their hair on fire over the EPA ruling by the Supreme Court.

Senator Elizabeth Warren, who spent a good portion of her career claiming Native American status only to have to apologize after a DNA test, suggested the Court is illegitimate and referred to it as “extremist” and “radical.”

Warren also told followers that “the planet is on fire.”

Our planet is on fire, and this extremist Supreme Court has destroyed the federal government’s ability to fight back.

This radical Supreme Court is increasingly facing a legitimacy crisis, and we can’t let them have the last word.

Now, if the planet is on fire, and low-information supporters believe that it’s the Supreme Court that lit the match, what do you expect to happen? Especially when there have been assassination attempts against at least one Justice.

MSNBC’s Chris Hayes described the Supreme Court as “a threat to the planet.”

Thoughts and prayers for you during this awful time. Off the football field, of course

Ah, the tears are strong with that one.

Speaking of liberal tears, does anyone remember the ProPublica report that profiled how hard it was for employees at the EPA to work under a Trump administration? Here’s an unintentionally hilarious excerpt.

At EPA headquarters, the mood remains dark. A longtime career communications employee said in a phone interview Tuesday that more than a few friends were “coming to work in tears” each morning as they grappled with balancing the practical need to keep their jobs with their concerns for the issues they work on.

Wonder how they’re feeling today knowing the Supreme Court curtailed the power of the EPA and delivered a significant victory for the coal mining and coal power industry.