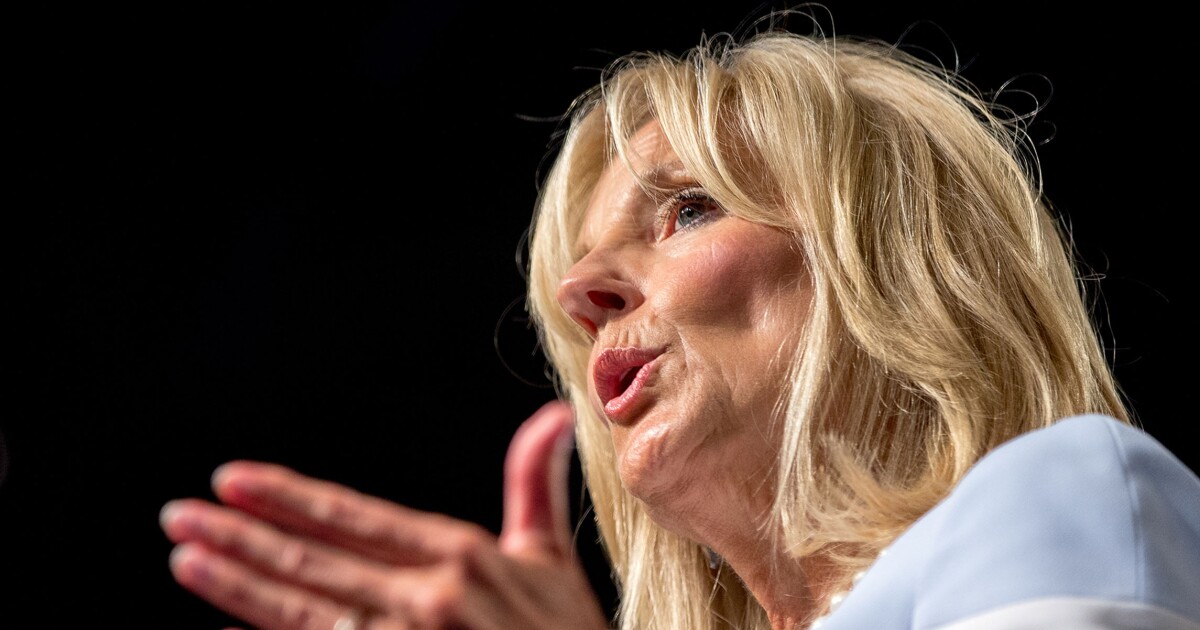 First lady Jill Biden was roasted on social media for her appearance at a “LatinX IncluXion” luncheon in San Antonio on Monday.

Biden was one of the scheduled speakers at the luncheon, which aimed to increase awareness of how Latinos are “integral” to diversity efforts in the workplace, according to the event description. But the occasion will perhaps best be known for how critics, Republicans and conservative Hispanics among them, chided the first lady for not just the name of the event but also what she said.

“Maybe if we rebrand the Southern Border as Souxern BorderX, Joe Biden will finally visit?” tweeted Texas congressional candidate Cassy Garcia, who is vying to unseat Rep. Henry Cuellar (D) in a seat Republicans believe they can flip in November.

Others criticized the event’s usage of the term “Latinx,” a gender-neutral version of the term “Latino” that is often used despite being disfavored among many Latino voters. Only 2% refer to themselves as Latinx, while 40% said they were offended by the term, according to a December poll. Another 30% said they were less likely to vote for a candidate who used the term.

“Everyone knows that not a single Hispanic uses ‘Latinx,’” said Carolina Amnesty, a Republican running for Congress in Florida. “The reason why woke corporations and Democrats keep imposing it on us is to control how we think about gender, and thus, how we vote. Unfortunately for them, we believe in God, Family, and Freedom — not MarXism.”

Everyone knows that not a single Hispanic uses “Latinx.” The reason why woke corporations and Democrats keep imposing it on us is to control how we think about gender, and thus, how we vote.

Unfortunately for them, we believe in God, Family, and Freedom — not MarXism. https://t.co/yjcjCCWith

Biden used her speech to call on Hispanics to band together in the upcoming elections and point to the “diversity of this community” that is required to implement change.

Detractors mocked the first lady for her pronunciation of “bodegas,” pronouncing it as “bogidas,” and saying the Hispanic community is as unique as the “breakfast tacos” in San Antonio.

Jill Biden says Hispanics are as “unique” as tacos and calls bodegas “bogidas.”

No wonder Hispanics are fleeing the Democratic Party! pic.twitter.com/rhBB1pSNvZ

The first lady also used the event to speak out against the Supreme Court’s recent decision to overturn Roe v. Wade and to call on lawmakers to pass a federal ban on so-called assault weapons, but those messages may have been lost on many people, according to Frank Luntz, a political operative and consultant.

“Any productive work that Jill Biden does here will be cancelled out by the event calling itself the Latinx Luncheon,” Luntz said in a tweet.

Any productive work that Jill Biden does here will be cancelled out by the event calling itself the Latinx Luncheon. https://t.co/mzMxAaaLqb

President Joe Biden’s popularity among Hispanics, historically a crucial voting bloc for the Democratic Party, is on the decline.

Only 32% strongly or somewhat approved of Biden’s presidency, while over 60% strongly or somewhat disapproved, according to a New York Times/Siena poll that surveyed 849 registered voters between July 5-7 and had a margin of error of 4.1%. In a rematch between Joe Biden and former President Donald Trump, 42% said they would support Biden for reelection, compared to 39% who said they would vote for Trump.