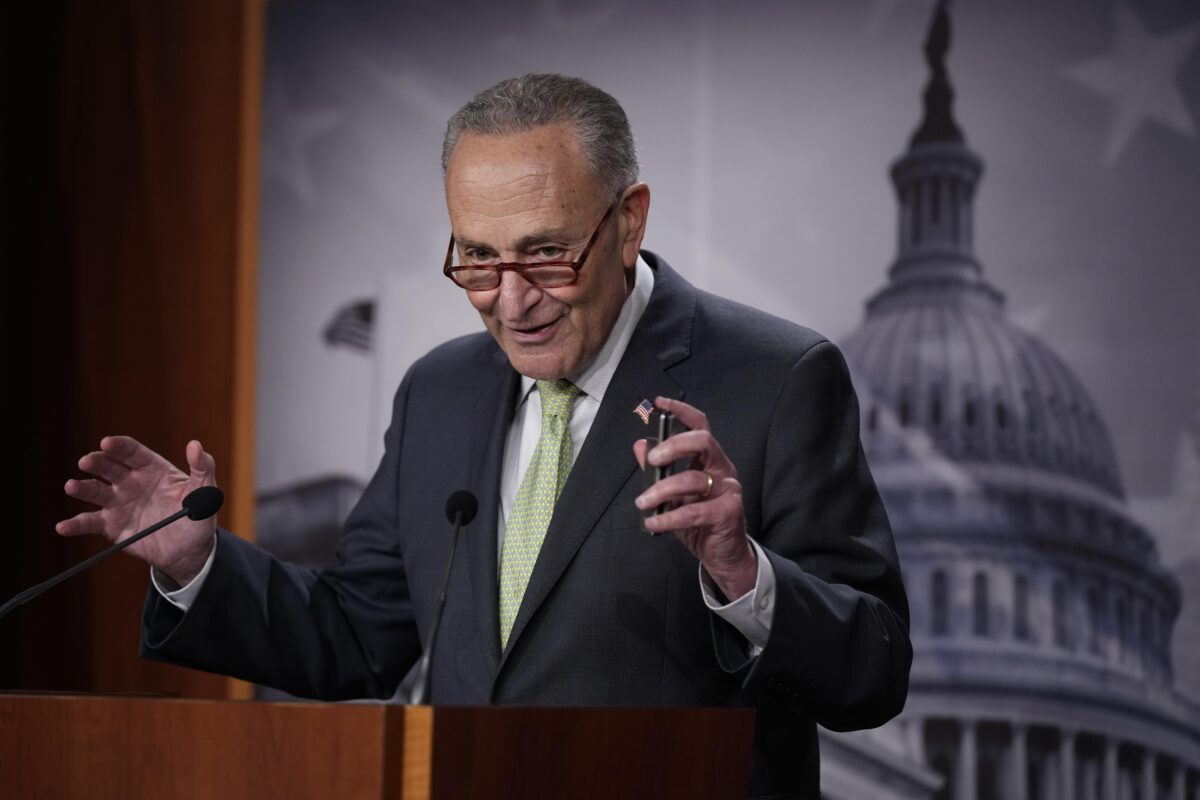 President Joe Biden and the Senate Democrats, on Aug. 7, pushed through the Inflation Reduction Act of 2022, which they claim will fight inflation, lower the federal deficit, and support the green economic polices that they claim will generate economic growth.

The vote was 51–50, with Vice President Kamala Harris casting the tie-breaking vote.

The Senate is scheduled next week to begin voting on a reconciliation bill with the House that may put all of the Build Back Better tax and spending increases back on the table.

The bill is a slimmed-down version of the original Build Back Better plan that failed to pass last year, and many critics are questioning if it will achieve any of its goals, after several studies reviewing the bill came out.

The Democrats claim that it will raise $739 billion in new revenue, create $370 billion in spending on energy and climate change, and remove $300 billion from the federal deficit.

The revised bill gained traction after Sen. Joe Manchin (D-W. Va.) expressed support for it last week after gaining some concessions after stopping the Build Back Better bill last year.

After Manchin made his deal with the Democrat Senate leadership, Sen. Kyrsten Sinema (D-Ariz.) said she would support the bill on Aug. 5, after gaining minor concessions.

What’s in the Bill?

The new act proposes to inject $750 billion into an economy already dealing with skyrocketing inflation due to trillions of dollars of pandemic-related stimulus injections and supply-chain chaos.

“Democrats are opening brand-new loopholes for special interests to avoid the new Made-in-America tax. The tax targets American manufacturers, who will create jobs and help us get out of the recession,” wrote the Ways and Means GOP committee in a tweet.

“[Republicans] are sounding alarms that this bill will raise taxes on American families, but it does not. Here’s the plain truth: the bill will not raise any taxes on families making under $400,000 a year,” responded Sen Chuck Schumer (D-NY), a key sponsor of the bill.

In fact, the Senate’s Joint Committee on Taxation (pdf) had already admitted that the new bill would raise taxes on nearly all income brackets, mainly middle- to upper-middle class Americans.

It also will raise taxes especially for low-end wage earners and small businesses, say critics, who believe it will destroy what is left of the middle-class, despite Biden’s statement that the act would not increase taxes on individuals making less than $400,000.

Another key provision, panned by critics, will double the size of the IRS by hiring 87,000 new employees with an influx of $80 billion, making it one of the largest federal agencies on paper.

At least $45.6 billion out of the $80 billion will be set aside for tax enforcement, including litigation, criminal investigations, investigative technology, digital asset monitoring, and a new fleet of cars for the tax agents, plus millions of rounds of ammunition.

The IRS is expected to use its new resources to conduct more audits, civil suits, and criminal referrals primarily against middle-class taxpayers, where most of the potential revenue is located.

“The new wave of audits will hit taxpayers even as tax revenue as a share of GDP is back close to its historical norm of 18.5 percent and may be going higher as corporate and individual tax revenue soars. Tax receipts were up 25 percent in the first nine months of fiscal 2022 after rising 18.3 percent in fiscal 2021,” said the editorial board of The Wall Street Journal.

“The federal government isn’t starving for revenue. Congress wants more tax revenue because it can’t control its appetite for spending. That’s why it wants a tax agency in beast mode,” concluded the editors.

The bill would impose a 15 percent minimum tax on corporate book income for corporations with profits over $1 billion, effective for tax years beginning after Dec. 31, 2022, but will only rake in $313 billion.

Also imposed is a 1 percent excise tax on stock buybacks, which is expected to bring in $73 billion annually.

“After the Tax Cuts and Jobs Act, we saw half a million manufacturing jobs come back and be created in America. We saw investment in intellectual property, and a giant sucking sound of companies returning to the United States,” said Brady.

“Under this president, we’ve seen just the exact opposite. These tax hikes are going after those companies we value the most—manufacturing, energy, telecom. These are very harsh tax hikes. Our economy can’t take this. There couldn’t be a worse time for it.”

No Deflation on the Horizon

With regard to inflation, critics say the bill will reduce long-run economic growth, worsening the situation by constraining the productive capacity of the economy.

The bill would reduce inflation only in the short term, according to the Tax Foundation, an independent tax policy nonprofit.

“By increasing spending, the bill worsens inflation, especially in the first two years, as revenue raisers take time to ramp up and the deficit increases. We find that budget deficits would increase from 2023 to 2025, potentially worsening inflation,” said the tax policy center.

According to the Congressional Budget Office, in its latest forecast from May 25, federal spending for 2022 is expected to reach 23.5 percent of gross domestic product (GDP) and grow to 24.3 percent over the next decade.

The Tax Foundation said that the future projections of the federal budget is at a “level only exceeded during the pandemic and World War II, and far above the 50-year average level of 20.8 percent.”

The bill now awaits passage by the House, which is set to convene on Aug. 12, 2022 for final passage.