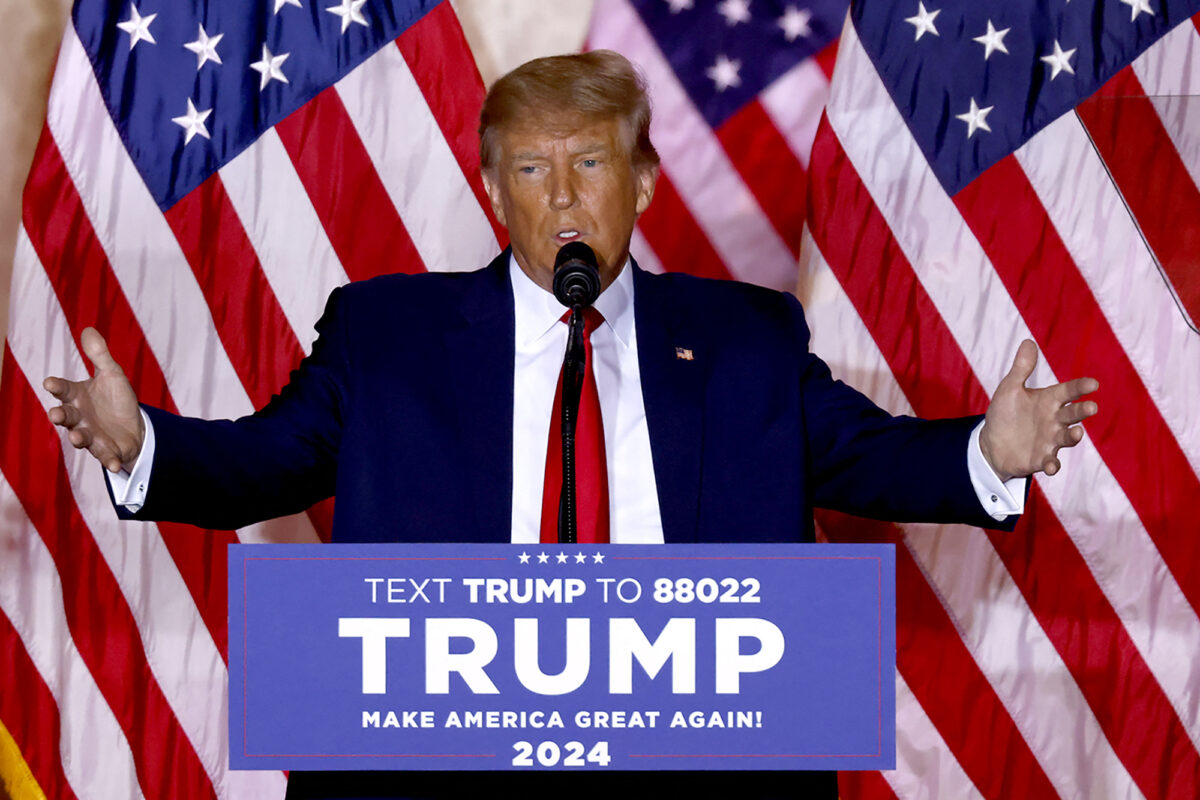 Speaking to a crowd of supporters at his Mar-a-Lago resort on Nov. 15, Trump described a broad vision for the nation. Toward the end of his speech, the 45th president turned to a list of concrete policy proposals titled the “National Greatness Agenda.”

Trump has previously discussed a number of the items on the agenda, such as imposing term limits on members of Congress and building a missile shield. Other items appear to be entirely new, including a proposal to cut federal funding from public schools that teach critical race theory and gender ideology.

The former president said there will be “much more to come in the months ahead,” which appears to suggest that the list of promises will expand as his campaign builds momentum.

CRT and so-called gender education sprang from the radical fringes of left-wing academia to become nearly omnipresent in U.S. public schools. The proliferation of these and other liberal ideologies has triggered a grassroots national movement by conservative parents.

Trump has previously instituted a ban on CRT training for federal employees. President Joe Biden, a Democrat, rescinded the ban after taking office.

“When I’m in the White House, our schools will cease pushing critical race theory—as they were—radical civics, and gender insanity. Or if they do that, they will lose all federal funding. But we’ll get them to stop,” Trump said.

The former president raised the subject of males competing in female sports during his first public speech after leaving the White House in 2021. At the time, he said it was “crazy” to allow biological males to compete in women’s sports.

Eighteen states have enacted legislation prohibiting males from competing in female sports, according to the Movement Advancement Project. Idaho was the first state to enact a ban in March 2020. Nine other states, including Texas and Florida, followed suit in 2021.

“We will not let men, as an example, participate in women’s sports. Is that OK? No men. No men,” Trump said. “We’ve had tremendous, tremendous problems, and it’s very unfair to women. Just very, very unfair.”

Trump promised to revoke Biden’s pandemic-related mandates and to rehire, with full back pay, the military service members who were fired from their jobs for refusing to take the COVID-19 vaccine.

A portion of Biden’s mandate regime has been struck down by the courts, but the requirement for federal employees and military members is still in place, affecting roughly 3.5 million people.

As of last month, 1,760 soldiers have been separated from the Army because of their refusal to take the COVID-19 vaccine. The Navy reported 1,893 separations.

“We will abolish every Biden COVID mandate and rehire every patriot who was fired from our military—with an apology and full back pay,” Trump said.

Trump has been pushing for an all-encompassing missile shield since his first term in office. As commander in chief, he stated in 2019 that the goal for this military apparatus was to “ensure we can detect and destroy any missile launched against the United States—anywhere, anytime, anyplace.”

At the time of those remarks, the military had released a missile defense strategy that drew attention from experts for including China and Russia as threats that have to be confronted assertively, according to the Arms Control Association.

In remarks at Mar-a-Lago, Trump specifically discussed the threat from nuclear missiles, suggesting that Russia and China are the threats he’s addressing. Iran and North Korea haven’t demonstrated a working nuclear-tipped ballistic missile.

“As events overseas have shown, to protect our people from the unthinkable threat of nuclear weapons and hypersonic missiles, the United States must also build a state-of-the-art next-generation missile defense shield,” Trump said. “We need it.”

Clean House at FBI and DOJ

The former president’s choice to cite the FBI and Department of Justice (DOJ) as the greatest threat to the United States is no surprise, considering the gauntlet he and his associates were run through as part of the disinformation campaign that falsely insinuated a conspiracy between the Trump campaign and Russia.

The FBI used a now-debunked, Clinton-funded dossier of anti-Trump claims as part of the rationale to open an investigation of the Trump campaign and obtain surveillance warrants against Carter Page, a former campaign official. That investigation evolved into the special counsel probe by Robert Mueller.

After a highly intrusive and intensive investigation that hampered Trump’s agenda, Mueller filed no charges against the president and prosecuted a handful of Trump associates on process crimes.

Subsequent inquiries into the handling of the FBI investigation exposed a broad pattern of bias and failure that ran all the way up to the top ranks of the bureau.

After Trump left office, the DOJ and FBI launched one of the biggest investigations and prosecution sprees in history against the protesters who attended the Jan. 6, 2021, protests in Washington and entered the U.S. Capitol. In rallies earlier this year, the former president suggested that he would pardon all Jan. 6 prisoners.

“But as I have said before, the gravest threats to our civilization are not from abroad, but from within,” Trump said. “None is greater than the weaponization of the justice system, the FBI, and the DOJ. We must conduct a top-to-bottom overhaul to clean out the festering rot and corruption of Washington, D.C.”

The president briefly mentioned that he was pushing for term limits back in 2018. At Mar-a-Lago on Nov. 15, he said the legislation is part of his overall plan to “drain the swamp” in Washington.

“To further drain the swamp, I will push for a constitutional amendment to impose term limits on members of Congress. It’s time. It’s time,” Trump said.

The idea of legislating term limits has a long history. The two-term limit for the president of the United States was enshrined in the 22nd amendment to the U.S. Constitution.

Despite gaining popular support in the 1990s, term-limit legislation appears to be nearly impossible to enact since senior members of Congress are unlikely to advance or vote for legislation that isn’t in their best interests.

In another throwback to 2016, Trump promised to institute a lifetime ban on lobbying for former members of Congress and members of the president’s cabinet.

As president-elect, Trump put in place tough restrictions on lobbying, including a five-year ban on members of the administration who were leaving for the private sector. During the last days of his term in office in 2020, Trump rescinded the executive order which dictated the lobbying ethics rules.

Trump’s proposal for a ban on trading stocks by members of Congress might attract bipartisan support. With the backing of House Speaker Nancy Pelosi (D-Calif.), Democrats released legislation to that effect in September.

Trump’s proposal follows a Wall Street Journal series published last month that found that hundreds of senior executive branch officials owned stock in firms that were lobbying their agencies. More than 60 officials traded stocks before their agencies announced enforcement actions against the companies in which those officials held stocks.

In his speech, Trump didn’t mention whether he would extend the trading ban to executive branch officials.

“We want a ban on members of Congress getting rich by trading stocks with insider information,” Trump said. “And many of our great members agree with that. They actually agree with that.”

Voting law reforms have been at the top of Trump’s agenda since the tumultuous aftermath of the 2020 election. The former president dedicated a large portion of his first post-White House speech in 2021 to the topic of election integrity. His 2024 campaign promise matches what he had called for back in February 2021: mandatory voter ID, one day of voting, and paper ballots.

Trump also said he wants all votes to be counted on election night. Prior to Trump’s speech, election officials in Nevada and Arizona spent several days counting votes in two races for the Senate. Democrats ended up winning both races.

Although elections are administered at the state level, the federal government has a long history of lawmaking to regulate elections. After taking control of both chambers of Congress in 2021, Democrats pushed for a sweeping federal reform of elections, which called for the opposite of what Trump is pushing for. HR1, the Democrat legislation, would mandate states to implement early voting, ban state voter ID laws, and require states to conduct automatic voter registration, among other provisions.

“And of course, we will do whatever it takes to bring back honesty, confidence, and trust in our elections,” Trump said. “To eliminate cheating, I will immediately demand voter ID, same-day voting, and only paper ballots, only paper ballots.

“And we want all votes counted by election night. They spent all of the money for machines and all of this stuff and they end up two weeks later, three weeks later. By that time, everyone forgot there was even an election. It’s horrible.”