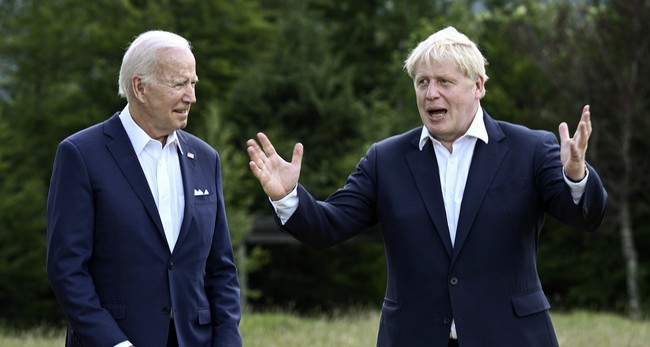 Is it really that difficult to keep Daddy Showers Bikefaller from grabbing at every tween girl he sees on the rare occasions they let him out of the White House? He’s like the Lincoln Project, except with female and no panel van.

The term “regime” best describes The Regime, and we hardcore cons have been using it a lot lately. Now our conservative betters have decided to take a break from failing to conserve important things and to focus on stopping us from using this evocative and accurate term for the present power paradigm. They can stuff it up where they can’t clutch their pearls.

Brit Conservatives Show the US GOP How To Blow It

Boris Johnson brought in a huge, record-setting victory for the Conservative Party with a mandate to implement Brexit and to do conservative things. The Conservative Party had been in power for a long time, and it had gotten soft. Labour was so enamored in communism and CRT crap that the people went Tory almost by default for years, but this time they gave instructions.

And the Conservatives ignored the people’s instructions. Instead of a party implementing a program of law and order and economic prosperity, you got pinko-lite party focusing on the kind of frivolous nonsense that activates posh twits. Johnson did implement Brexit, but he also went all in on the climate change hoax. He allowed a flood of illegal aliens to row across the English Channel and welcomed them with open wallets. He went all-in on COVID paranoia, though he got caught ignoring what he knew to be the nonsense rules he imposed on everyone else. He refused to crush crime and tolerated the PC/woke fascist nonsense that leads to bobbies calling people up to threaten them about illegal social media posts. In short, he did what the Labour Party would have done, but a smidge less.

So, now he’s out and Liz Truss came in and started making conservative noises and her own party has shivved her. By the time you read this she might be in the bin too. The polls show the Tories getting crushed, and why not? They aren’t conservative. What’s the point?

You Republicans in Congress and elsewhere are about to win a big victory. A yuge victory, in Trumpese. But it’s not a victory purely because you are not Democrats. That’s what the Brit Conservatives apparently thought. No, we want you to do conservative things. Let me help explain, because too many of you are unclear.

If the regime media (see below) likes it, don’t do it.

If Mitt Romney thinks it’s a good idea, don’t do it.

If it does not help the people who elected you – and the big corporations did not elect you – don’t do it.

If it fails to own the libs, don’t do it.

Learn from others’ pain, not your own. Fail to be conservative and you’ll get wiped out next time.

Gross President Badfinger goes to California and once again gets caught on tape skeeving on some tween. Look, the Democrats are cool with his Tara Reade assault and his sick showers with his young daughter. Hell, those kind of experiences are pretty much required for a Democrat politician. But this is getting out of control.

Someone put him back in his basement. Turn the tube on and let him watch “Murder, She Wrote.” Maybe tell him Angela Lansbury dies so at least we get a break from his gropey grooming as he mourns.

Not a diss of Angela Lansbury – she seems like she was a very nice lady.

Look, we have a personal interest in Biden not feeling up every chicklette within his perverted blast radius. It’s not merely that we want to protect little kids, unlike Democrats who see them as the physical, emotional, and sexual fodder for their pedo-friendly constituents. It’s that foreigners are watching, Normally, no one should care what a bunch of alien savages think, but the problem is that when they see this degenerate hand-her-in-chief doing his icky thing, they start thinking America is weak. And that’s because America is weak. We can’t embolden the barbarians by demonstrating that our crusty Caligula is busy with his perversions and unready to lead. But that’s the situation. Ron Klain, stick some saltpeter in that doofus’s evening gruel and keep him away from der kinder.

Don’t Call The Regime “The Regime”

So, a lot of us have bee referring to The Regime because it is a regime. It’s illegitimate and evil and that is what the term evokes, so that is the term we use. But you’ll never guess what. Ok, hold onto your hats. The National Review has decreed that we can’t say “The Regime” anymore.

I’m not going to link it, and in truth I did not read it. But I don’t have to. I’ve read the same thing a million times about another million pseudo-outrages that rile up Team Fussbudget.

Whenever we do something effective or adopt a term that accurately and powerfully evokes the truth, some Fredocon comes along and demands we stop. Every single time we do something that works or gets our message across powerfully, we are ordered to stop because, well, oh well I never!

That’s not who we are!

We’re better than that!

What is it with this losers? What compels them not only to submit themselves, but to demand that we join them in honorable defeat and serfdom? The French had nothing on the likes of David French (if he was a man he would be the king of these wusses) when it comes to not merely surrender but active collaboration.

No, we’re not going to stop calling it “The Regime” because it is a regime, and we feel like calling it that, but most of all, because screw you.

It’s here and it hit Number One in three Amazon categories! It’s Inferno, the seventh book in the Kelly Turnbull series of conservative action novels set in America after a notional national divorce! Catch up with all my action-packed novels, including People’s Republic, Indian Country, Wildfire, Collapse, Crisis, and The Split,, and well as the non-fiction We’ll Be Back: The Fall and Rise of America. Plus, keep up the fight by joining Townhall VIP, including an extra Wednesday column, my weekly Stream of Kurtiousness video, and the Unredacted podcast!

My super-secret email address is kurt.schlichter@townhall,com