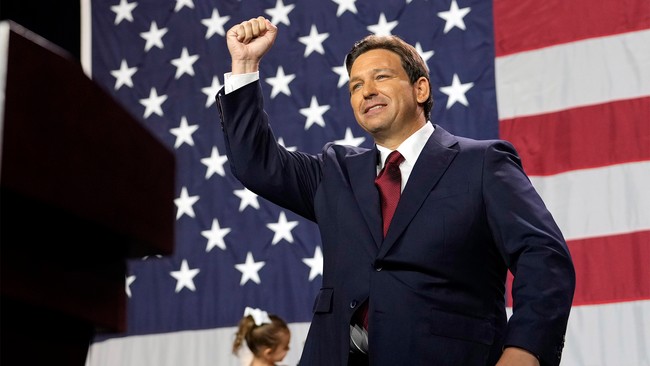 In a long, meandering speech at his Mar-a-Lago home last week, former President Donald Trump formally announced his third candidacy for president of the United States. Though he touched on some great points and avoided some of the pitfalls he’s fallen into of late – like pointlessly attacking popular GOP officeholders – the speech seemed quiet, lackluster even compared to the energy that typically surrounds a Trump stump speech. It could be age, but it could also be purposeful given the severity of the moment we find ourselves in. For once, Trump’s advisors seemed to rein him in, but we all know that won’t last long.

Still, I’ll admit that watching the speech brought a bit of nostalgia. As someone passionate about politics my entire life, 2016 was the greatest year ever, and just thinking about the prospect, however slim, of reliving that again makes me happy. Even with all his faults and his utter failure to properly handle Covid in 2020, if I could make a magical wish that would somehow result in a 2024 presidential victory for Donald Trump, I’d do it in a heartbeat.

But I can’t, nor do I believe the former president is our best option for winning a general election in 2024. So I can’t let nostalgia about the past get in the way of my genuine convictions about the future, even if it costs me readers and social media followers (and believe me, it has). Is Trump the worst the GOP has to offer? Far from it! I’ve noted repeatedly that if you truncated Trump’s term from 2017 to 2019, you’d have one of the best presidencies in all of US history. Just name an economic metric and it was probably off the charts. Five more years of that and we’d have been a powerhouse, unlike anything the world has ever seen. And don’t even get me started on reshaping the Supreme Court and the federal judiciary. Huge beyond words. But Covid happened, and Trump’s horrid response happened, and the 2020 election happened, and January 6th happened (I know I know, but I also know how the media plays it to 70% of the population), and so on and so on … and we now sit on the brink of utter economic and cultural collapse.

Can Donald Trump bring us back from that brink? If he had the levers of power, I have little doubt that he could, at least economically to the degree that things haven’t been permanently damaged. But he has to get elected first, and unfortunately for him, and all of us, that’s a taller order than anything he’s faced in the past. To those who think Trump has a genuine path to 270 electoral votes, I’d love to pick your brain about where that path lies. Is it through Pennsylvania, which just elected John freaking Fetterman to the US Senate? Is it through Michigan and Wisconsin, which just reelected their Covid-fanatic governors to a second term? Is Trump supposed to retake Arizona – the land of the McCain voter – when Kari Lake couldn’t? Is Georgia going to go all-in for the former president after he made war with their popular GOP governor? Are single females and gen Z voters, who proved they’ll vote for Democrats even with an unpopular Democratic president, a tanking economy, and Trump not on the ballot, going to suddenly change their minds and go full-MAGA? Get real.

Is it all bad? Not exactly. The ‘contender’ list put forth by Fox News pundits includes the likes of Mike Pence, Nikki Haley, Mike Pompeo, Chris Christie, and even that mask-loving Covid fanatic Asa Hutchinson. None of these are formidable figures who could compete on a national scale with anybody the Democrats put forth, and I would argue that Donald Trump is a better candidate than almost anybody in the hypothetical field.

I say “almost,” because there is one person who I believe would make a better general election candidate than Trump. One. It’s crazy, sure, but in an age of political polarization, ballot harvesting, and general shenanigans in key places, the mountain any GOP candidate must climb is extraordinarily steep already. So while Trump finishing second in a hypothetical list might seem good – and it’s not an insult for sure – it isn’t good enough. In my opinion and the opinion of a significantly growing segment of conservatives, the only person with a snowball’s chance in hell of winning a general election against Democrats is Florida Gov. Ron DeSantis.

Would it be a cakewalk? Of course not. But as has been noted by many, DeSantis brings all the Trump policies without the Trump baggage. Sure, said shenanigans abound in certain places and Republicans would need to thread 270 in key states by winning beyond the margins of cheating, but if anyone can do it, I believe this guy can. The most likely DeSantis path would lie through states Trump won along with Georgia, Nevada, Arizona, and Wisconsin. Tough but doable, and no Pennsylvania or Michigan is needed.

Even so, who knows if the popular Florida governor will even run? If he does, he likely wouldn’t announce until the spring, and between now and then there will be a ton of pressure to stay put. Many staunch Trump supporters want DeSantis to wait until 2028, but if he chooses to do that he’ll be two years removed from his governorship and, with the lightning speed of news cycles these days, old news. No, in my opinion, it’s best to strike while the iron is hot, and that time is 2024. DeSantis is a winning incumbent, exceedingly popular with Trump’s base, and has a chance to save the GOP – and the country – from four more years of hell by knocking off Trump first, then any Democrat they choose to run.