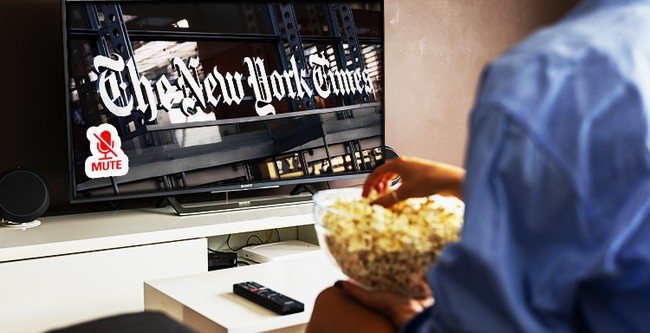 Donald Trump’s announcement that he was running for the presidency in 2024 has The New York Times wildly excited. This is not an exaggeration of the media’s obsession with the man either – the paper displays just how much they missed having Trump on their pages.

Behold the sheer number of pieces declaring there is no need for Trump –  among the well over one dozen features centered on Trump in a 24-hour period.

Not to imply that the @NYTImes is obsessed with Trump running once again and desperate to have him back on their pages — Instead I’ll just display it.
All of these are from THE PAST DAY
1/ pic.twitter.com/y8QG7vne2m

With tech companies laying off people by the thousands, it is telling how the press seems only outraged at Elon Musk letting Twitter staffers go. The latest hysterics are over reports that employees who were trashing Musk on the internal messaging platforms at the company were subsequently fired. A number of pundits thought there was cleverness in pointing this out against Musk’s touting of free expression. Joining this fray was pollster Frank Luntz.

The “free speech absolutist” has had a change of heart. https://t.co/imfbAYeRXp

A few things need to be pointed out for Frank. First, these people are perfectly free to express themselves today, they just will be doing it elsewhere. Next, Luntz ignores that for years when conservatives had said they were being silenced on the platform, the pithy retort has always been, “It’s a private company, the First Amendment does not apply.” Best of all, however, is that Frank appears to have forgotten that not so long ago, he chimed in about employees who were let go for creating a negative impact on a company, and he was perfectly agreeable to the company taking such action.

ABC made the right decision – whether you’re Roseanne or a kneeling NFL player, your employer has the right to fire you if you’re pissing people off and hurting the business.

You’re free to say what you want… But you’re not free from the consequences.https://t.co/elhoK30WD2

Both Kinds of Standards – CNN

There is the story ricocheting around social media that Iran is poised to give the death sentence to 15,000 protestors in that nation. It has been shared and spread by such famous names as Viola Davis and Sophie Turner and Canadian Prime Minister Justin Trudeau. NBC News reports that so far, the actual number sentenced is somewhat smaller – two.

But what is telling is the approach to this spread of misinformation by media expert analyst Oliver Darcy. Understand now how the press normally wails about this type of behavior. Recently, those sharing actual news reports of the Paul Pelosi attack were dubbed as “right-wing conspiracy theorists” because the media cannot seem to get the story straight. Yet when it is left-leaning politicians and actors sharing patently false information, they do not seem to get a harsh rebuke from Darcy but instead are coached to just be a little bit more cautious going forward.

– “Another reminder to be careful what you share: A false claim about Iran sentencing 15,000 protesters to death has gone viral after celebrities and even some politicians shared it on social media.”

The telling detail is how little – if ever – you see/hear the phrase “left-wing misinformation.” When it is a case of details the media disapproves, “right-wing” is trotted out immediately.

The Reliable Sources A1: Donald Trump made it official, declaring his candidacy for 2024 — forcing news orgs to grapple with how to cover the campaign of a twice-impeached president who incited an attack on the Capitol after pushing elections disinfo. https://t.co/z4a6agsKGl

Recently, a story emerged that the Prime Minister of Vietnam was caught on a hot mic making some disparaging and undiplomatic comments regarding President Jose Biden and the United States.

– “In unguarded comments picked up by a live State Department video stream, the delegation proudly discussed its resistance to American demands for a statement condemning Russia’s invasion of Ukraine. ‘We made them back off,’ one official said, amid laughter. Perhaps most shockingly, Prime Minister Pham Minh Chinh repeatedly used crude language to describe an earlier meeting with President Biden and other U.S. officials at a White House dinner.”

As Paul Farhi reports in the Washington Post, the Voice of America’s Vietnamese-language service published the comments, creating a stir in that nation. And then, they vanished. Seemingly at the behest of the Vietnam embassy in Washington, D.C., VOA completely removed the report. It has been scrubbed from their site and entirely removed from all social media.

–  “‘It’s detrimental to our reputation as a news outlet,’ said the staff member, who asked not to be named to avoid retribution. ‘Our slogan is ‘A free press matters.’ This is so ironic.'”

Voice of America pulls a news story that embarrassed Vietnam’s prime minister after a complaint from the Vietnamese embassy. Was it self-censorship? Latest by me: https://t.co/vRZKc4wL2v

Reporting on the Mirror – THE NEW YORK TIMES

Considering all of the obsession over Trump in the press, it appears, at least for now, there is softened interest in the man elsewhere in the entertainment realm. This Fall, Maggie Haberman made a publishing splash when she joined in delivering a title to add to the dozens of books published about the 45th president. “Confidence Man” was not only a best-seller, but Haberman also had the production rights to the book sold to Apple in the summer, well ahead of publication.

Now, the online streaming division of the tech company has decided to drop the project from its development slate. Said one person in Hollywood, “‘Honestly no one in Hollywood really seems interested in touching the subject,’ says one well-known writer/producer. ‘The Brits did Boris Johnson (starring Kenneth Branagh) but we can’t seem to face the fact that we elected [Trump] president.'”

Exclusive: After quietly optioning Maggie Haberman’s Trump biography months before publication, Apple has decided not to go forward with it. https://t.co/NHN2BKnQUo