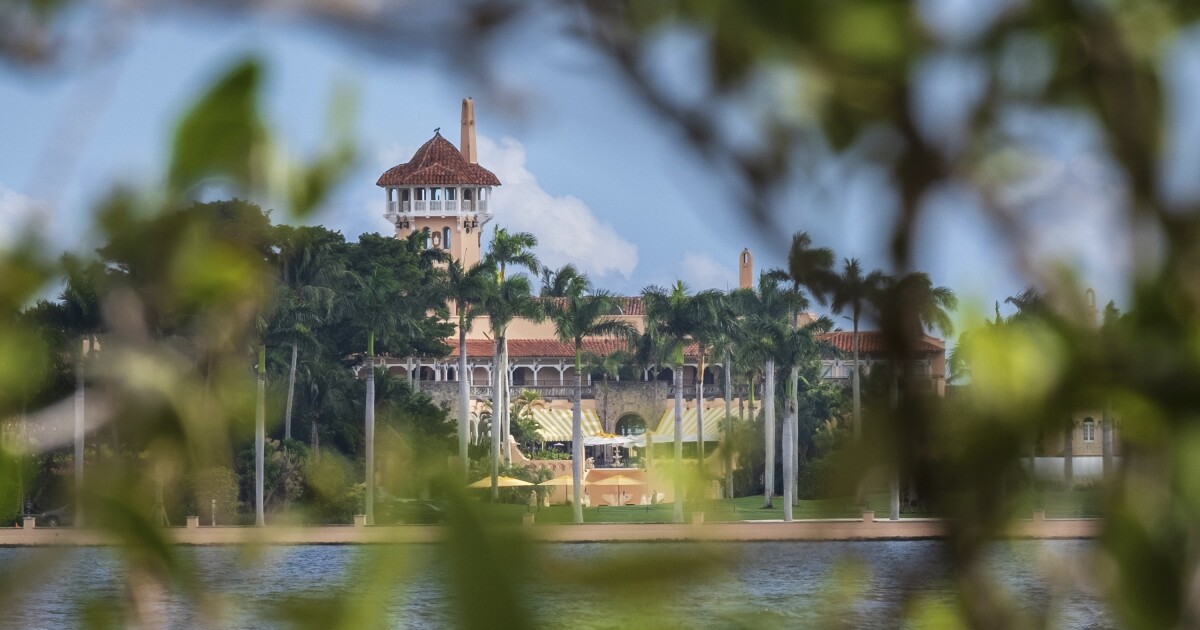 The events leading up to the FBI’s unprecedented raid of former President Donald Trump‘s Mar-a-Lago estate stretch back several years.

Scarce details are known about the raid, but Eric Trump claims he was informed it was related to accusations his father mishandled classified material that the Justice Department is believed to have been investigating for months. Here is a breakdown of the timeline we know so far.

While Trump was still in the White House, Politico reported that he had a habit of ripping up documents during his presidency, resulting in staffers being forced to follow him around and tape the documents back together in compliance with the Presidential Records Act. The report drew some attention during his presidency, but it was largely overshadowed by other controversies.

After Trump left the White House, the National Archives and Records Administration began communicating with Trump’s team to ensure it collected all outstanding materials from the Trump presidency that it needed. In December 2021, a representative from Trump’s staff informed the National Archives that they had located a number of records and began making arrangements for the agency to retrieve those records.

At some point in January 2022, National Archives officials collected 15 boxes from Trump’s Mar-a-Lago resort. This included a trove of documents such as communications with North Korean leader Kim Jong Un, a letter from outgoing President Barack Obama, talking points, schedules, and more, according to the Washington Post, which reported on the incident for the first time several weeks after it transpired. Trump advisers told the news outlet that the boxes largely contained mementos from his presidency and were not kept at Mar-a-Lago for nefarious reasons.

“Throughout the course of the last year, NARA obtained the cooperation of Trump representatives to locate Presidential records that had not been transferred to the National Archives at the end of the Trump administration,” the National Archives previously told the Washington Examiner in a statement. “When a representative informed NARA in December 2021 that they had located some records, NARA arranged for them to be securely transported to Washington. NARA officials did not visit or ‘raid’ the Mar-a-Lago property.”

In response to reports about the 15 boxes being retrieved from Mar-a-Lago and concerns about mishandling of classified material, Rep. Carolyn Maloney (D-NY), chairwoman of the House Oversight Committee, announced her committee would begin investigating the matter.

David Ferriero, the archivist of the United States, sent a letter to the House Oversight Committee confirming that the National Archives notified the DOJ about its discovery of classified material at Mar-a-Lago.

Several months into its inquiry, the Oversight Committee began butting heads with the DOJ over its review of Trump’s handling of presidential records. Maloney penned a letter to Attorney General Merrick Garland alleging the DOJ was hampering the National Archives from complying with the committee’s document requests from the Mar-a-Lago trove.

By May, the DOJ document inquiry had ratcheted up, and a grand jury had been established in the matter, according to a May 12 report from the New York Times. At that point, prosecutors had issued at least one subpoena and were issuing requests for interviews from former Trump administration officials.

In early August, public buzz about Trump’s record-keeping habits had largely cooled down — but then a bombshell hit. Monday morning, Eric Trump received a call that Mar-a-Lago was being raided by the FBI, he recalled in a Fox News interview with Sean Hannity. The younger Trump then relayed that information to his father. He estimated that over 30 FBI agents had descended upon the resort, storming through the gate, “ransacking an office, ransacking a closet,” and eventually breaking into a safe.

FBI agents showed up around 9 a.m. local time donning plain clothes and left around 6 p.m. local time, NewsNation correspondent Brian Entin reported. The Secret Service was notified just before the raid, and at least three lawyers arrived on the scene during the raid, per the report.

1/3
Per sources: search warrant at Mar-a-Lago was related to retention of classified docs. FBI showed up at 9am and left at 6:30pm. They were in plain clothes — so club staff likely thought they were secret service. That is why it didn’t leak earlier.

Peter Schorsch, publisher at FloridaPolics.com, tweeted a scoop that sources told him the FBI executed a search warrant at Mar-a-Lago and had just left the compound. He was scarce on details but appears to be the first person to have reported on the dramatic raid.

“They just left,” one source said.

Not sure what the search warrant was about.

TBH, Im not a strong enough reporter to hunt this down, but its real. pic.twitter.com/hMsGhlVp3d

After reports began swirling on social media about the raid, Trump broke his silence and confirmed that the raid had transpired on his Truth Social platform. Seemingly rattled by the raid, Trump decried that “these are dark times” for the country.

“These are dark times for our Nation, as my beautiful home, Mar-A-Lago in Palm Beach, Florida, is currently under siege, raided, and occupied by a large group of FBI agents,” Trump said in a statement Monday evening. “Nothing like this has ever happened to a President of the United States before.”

A torrent of Trump supporters began rallying in support of the former president near his Mar-a-Lago resort late Monday in response to news of the raid. The displays included mini parades of cars decked out in pro-Trump stickers and flags in a show of solidarity with Trump.

Trump again took to Truth Social after being rocked by the raid. He posted a dramatic video with thunder roaring in the background and a chyron claiming the United States was a “nation in decline.” The video featured a montage of Trump bemoaning the state of the U.S. economy and soaring inflation. The end of the video teased, “The best is yet to come.”

The Presidential Records Keeping Act of 1978 lacks “any real enforcement mechanism,” James Grossman, executive director of the American Historical Association, previously told the Washington Post. However, there are different laws governing the use of classified material and the preservation of government documents. For example, it is illegal to conspire to destroy government documents, according to the New York Times.

Marc Elias, the top lawyer for Hillary Clinton’s 2016 presidential campaign, suggested Monday that Trump’s handling of documents may have violated U.S. Code Title 18, Section 2071, which could bar him from seeking presidential office in the future. It is unclear whether Trump would be barred from holding public office if he were found to have broken the law.

It is unknown whether charges will ever be brought against Trump in connection with the raid, though Garland has left open the possibility of prosecuting the former president in connection to other allegations in the past.

Trump has reportedly been eyeing another stint in the White House, confirming to New York magazine that his mind is made up on the matter and all that remains to be decided is when he will announce a presidential run. He will need to declare his bid before the ballot deadline in the first primary state, which is over a year and a half away.