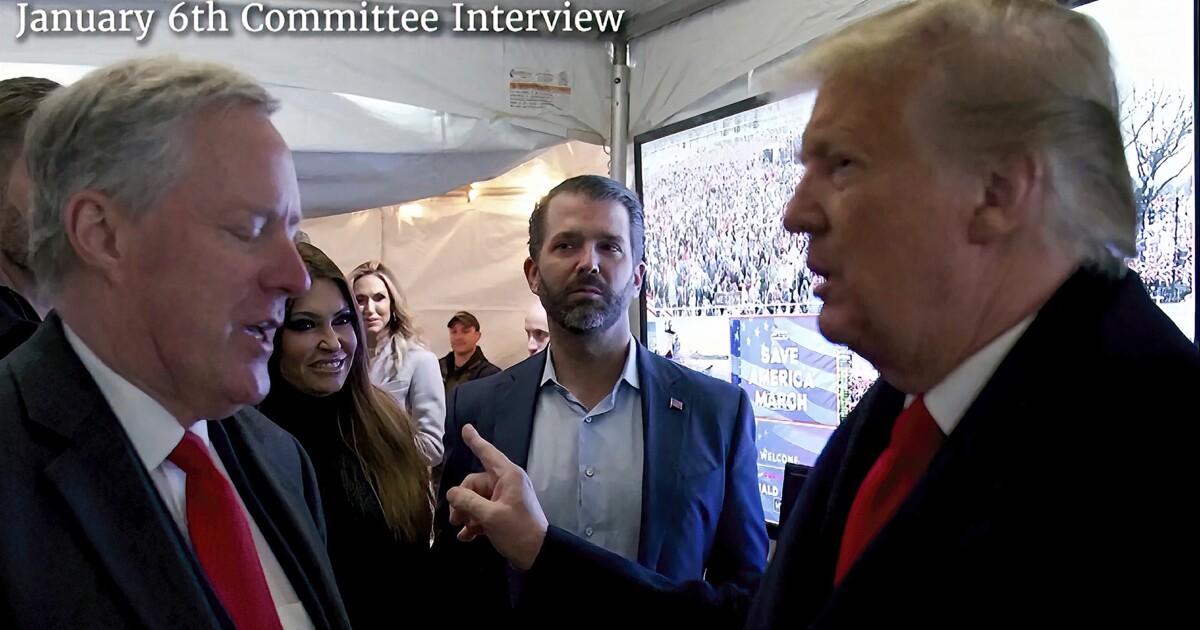 Former President Donald Trump is reportedly ignoring advice from some of his allies to refrain from communicating with current and former aides such as Mark Meadows who are in the crosshairs of the House Jan. 6 committee.

Despite their strained post-White House relationship and repeated advice to pare down communication, Trump and Meadows have spoken on several occasions, CNN reported. Some on Trump’s legal team have reportedly speculated that Meadows could face scrutiny from the Justice Department in its inquiry of the Jan. 6 riot.

“All of that is idle and uninformed speculation, apparently by people that know little but talk a lot,” Meadows’s attorney George Terwilliger told the outlet in response to questions about concerns from Trumpworld.

In tandem with the Jan. 6 committee, the Justice Department has been conducting a sprawling inquiry into efforts to challenge the 2020 election. This reportedly entails the alternate elector scheme and other behind-the-scenes machinations to challenge the election. Trump has reportedly been a subject of interest during questioning for the DOJ inquiry, and his legal team is said to be preparing for possible charges.

As the chief of staff, Meadows was privy to the inner workings of the Trump White House in the days surrounding the Capitol riot. His former aide Cassidy Hutchinson delivered bombshell testimony to the Jan. 6 committee in June about Trump’s behavior following the election. She testified that Meadows was present during a number of key meetings in which Trump allies discussed ways to overturn the election.

“The reason [Meadows] is valuable is also the reason he is in jeopardy: He was basically at Trump’s right hand throughout all these exercises and participated in key meetings and phone calls,” former White House attorney Ty Cobb told CNN.

Meadows had been subpoenaed by the Jan. 6 panel last year and turned over a trove of documents to the committee, though it later recommended holding him in contempt because members wanted additional cooperation. The DOJ declined to pursue contempt charges against Meadows.

The Jan. 6 panel has previously accused Trump of attempting to communicate with a witness in its inquiry.

One source was adamant that Trump’s relationship with Meadows is “not the same as it once was” during their White House days and that Trump has bad-mouthed Meadows to some of his other confidants, CNN reported.

Several high-profile members of the Trump administration, such as Marc Short, the former chief of staff to then-Vice President Mike Pence, and Greg Jacob, who was his counsel, delivered testimony to federal investigators in the inquiry. Additionally, former White House counsel Pat Cipollone and his top deputy were subpoenaed for testimony by investigators for the inquiry in recent days.

Meanwhile, Trump’s legal team is having talks with the DOJ about whether he can block conversations he had as president from the DOJ inquiry.

“There is clearly a concerted effort to undermine the vital, Constitutionally-rooted Executive and Attorney-Client Privileges through partisan, political persecution,” a Trump spokesman told CNN. “How can any future President ever have private conversations with his attorneys, counselors, and other senior advisors if any such advisor is forced, either during or after the Presidency, in front of an Unselect Committee or other entity, and be forced to reveal those privileged, confidential discussions?”