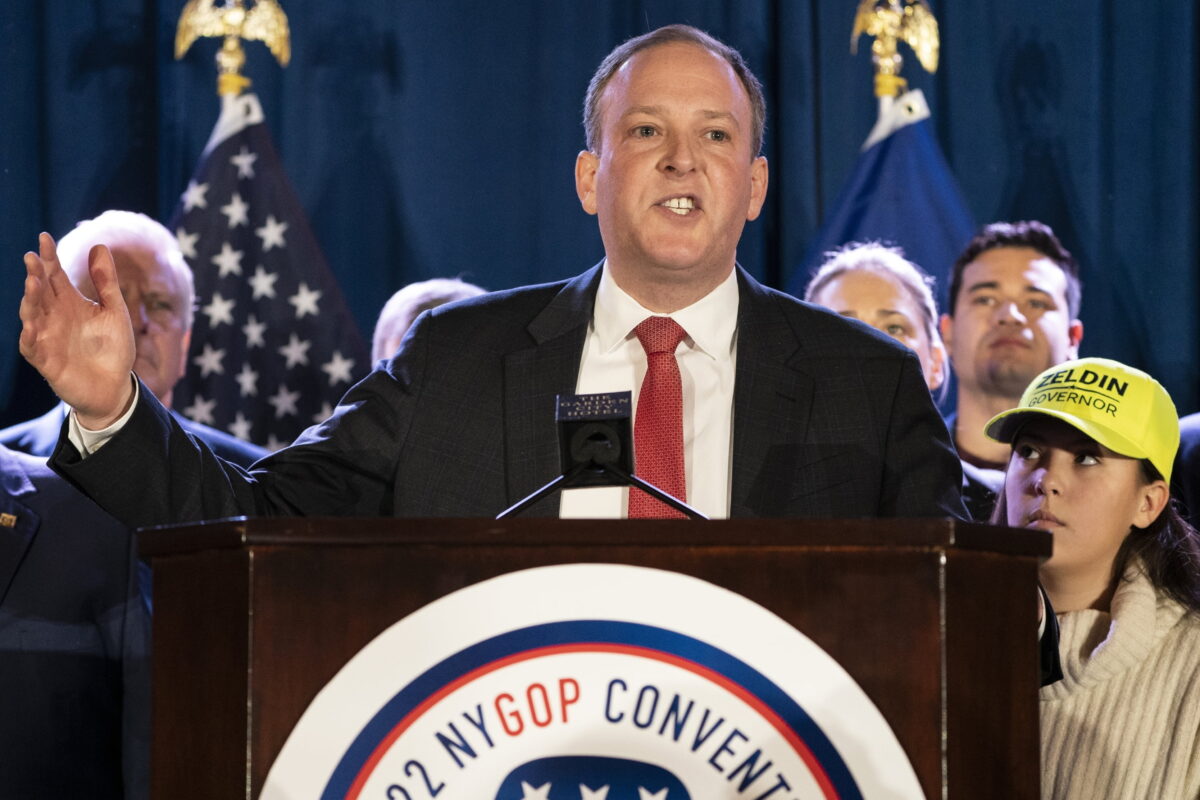 Former President Donald Trump has announced his endorsement of Rep. Lee Zeldin in the race for governor of New York, telling voters that the Long Island Republican can resolve the state’s crime woes.

“I have watched and known Congressman Lee Zeldin for many years. He is a great and brilliant lawyer who was a ‘must see’ for others in Congress when they had a complex legal problem that was holding up legislation,” Trump wrote on his Truth Social account on Oct. 16.

“Lee was strong on the Border, Crime, our great Military & Vets (like few others!), and fought hard to protect our 2nd Amendment, and succeeded,” Trump continued. “Lee Zeldin is a WINNER who GOT THINGS DONE. He will be a GREAT Governor of New York, and has my Complete & Total Endorsement.”

With about three weeks to go before the Nov. 8 election, Zeldin has made significant gains in polls against Democrat New York Gov. Kathy Hochul, who is seeking her first full term. According to polling data aggregator RealClearPolitics, Hochul held a double-digit lead over Zeldin in the summer, but that advantage has shrunk to a 5.3 percentage edge.

On Oct. 15, RealClearPolitics changed the New York governor race from “lean Democrat” to “toss-up.” Zeldin seized on the rating change, telling voters on Twitter that “We have just 24 days to go until we FIRE @KathyHochul & save our state.”

Inflation and crime are the most crucial issues to Republican and Independent registered voters in New York, according to a recent Marist College poll (pdf) conducted over a four-day period early this month. The poll found that 42 percent of Republicans said inflation was the most important issue, while 27 percent ranked crime as the most important. Among Independents, 31 percent said inflation, while 20 percent said crime was the most pressing concern.

Crime in New York City jumped 15.2 percent, with 11,057 crimes in September compared to 9,596 in the same month last year, according to NYPD data. Bulgary, auto theft, and grand larceny were the categories of crime that saw the biggest increases, rising 22.7 percent, 21.5 percent, and 21.3 percent, respectively, compared to September 2021.

If elected, Zeldin has said he will fire Manhattan District Attorney Alvin Bragg as part of his “law and order” plans to reduce crime in New York.

The Hochul campaign’s spokesman, Jerrel Harvey, has since condemned Trump’s endorsement of Zeldin. In a statement, Harvey called Zeldin “the most extreme and dangerous candidate to ever run for governor in New York State history.”

“While Trump’s endorsement doesn’t come as a surprise, becoming the former president’s handpicked choice for governor proves Zeldin’s full embrace of the MAGA agenda and shows just how out of touch he is with New York voters,” Harvey added.

Hochul has also taken to Twitter to dismiss Trump’s endorsement, saying, “New Yorkers rejected Trump and they’ll do the same for Lee in November.”

In the 2020 presidential election, then-Democrat candidate Joe Biden picked up 60.9 percent of the vote to Trump’s 37.7 percent. The last Republican presidential candidate to carry New York was Ronald Reagan in 1984.

“@leezeldin ’s strong campaign has given New Yorkers a once in a generation opportunity to FLIP our state red,” Stefanik wrote on Twitter on Oct. 16. “#NY21 is ready to turnout BIG time to help elect Lee and Save New York!”

‘Bring New York Back to Glory’

In a separate post on Sunday, Trump called on New Yorkers to vote for “the entire Republican Line.”

“Remember, when you cast your vote for Governor and Attorney General in New York State, that Crime (and Taxes!) is OUT OF CONT[R]OL, with Murder and everything else at record levels—People are fleeing to other states,” Trump wrote. “The Democrats have done less than nothing, the criminals are in charge, and it will only get worse (if that’s even possible?).”

Letitia James is seeking reelection as New York attorney general. She is being challenged by Republican candidate Michael Henry, a commercial litigation attorney from Queens.

According to a four-day poll (pdf) ending on Oct. 3 by the Trafalgar Group, Henry led James by 1 percentage point.

Trump attorney Alina Habba has said the lawsuit was politically-motivated.

“We welcome the opportunity to work with you after your victory in November knowing that once elected as Attorney General, under your guidance, faith in the Attorney General’s Office and the preservation of citizen freedom and rights will be restored,” said Ronald Walsh, president of NYS Law Enforcement Officers Union, Council 82, in endorsing Henry.