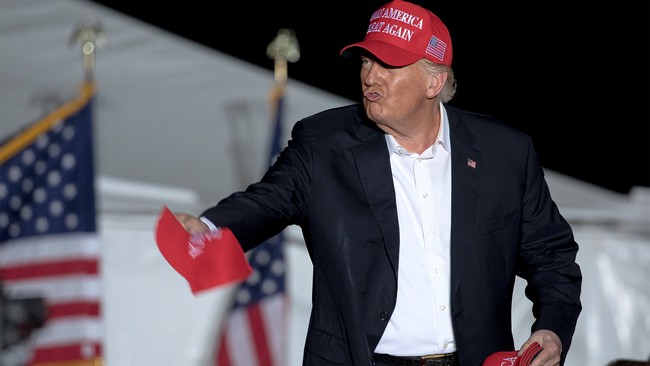 There are few people more annoying than self-professed “true conservatives” infected with a full-blown case of TDS – Trump Derangement Syndrome. These people, usually associated with the Bulwark or Dispatch, insist their way is the only way and anything former President Donald Trump did, even if they’d personally advocated for it their whole adult lives, doesn’t matter because the deliverer of their victories is imperfect. It truly is a disorder. But there’s another disorder Donald Trump needs to be aware of and address if he’s going to have any chance of winning either the Republican nomination in 2024 or the presidency again: Trump Exhaustion Syndrome.

I grew up in a UAW house in Michigan. Most friends of my parents and the parents of the kids I grew up with were either UAW members or in some other union – IBEW, Teamsters, etc. I still talk to a lot of them, and almost all of them have, to one degree or another, expressed a desire to take a break from Donald Trump.

It’s unclear if they’re done with The Donald, but they all express varying degrees of “We can’t miss him if he never goes away.”

There’s a lot of truth to that. Think what you will of the 2020 election and how we got to the results, but there is no doubt that some people simply had enough of Trump. A lot of people voted against Trump even though the liked the results he’d gotten as President, even though they knew Joe Biden would be bad at the job. Donald Trump needs to address that if he wants a chance of winning in 2024.

One way Trump could win back a big chunk of these voters is demonstrating he’s learned from the past and grown more serious as a leader. In 2016, Donald Trump was an outsider, a businessman running for office. He’s not that anymore. Like it or not, he’s a politician – you don’t get to be President of the United States and NOT be a politician, that’s just part of the deal.

Not only is Trump a politician, President is the ultimate insider. Granted, he was screwed over a lot by his staff, but he hired those people. That is another important thing Trump needs to demonstrate he’s learned from. He doesn’t need to pledge that he’ll not hire someone because he likes their appearances on Fox, but he should not hire anyone for that reason. Too much of his administration, and a huge percentage of the people he ended up firing, came to their jobs because they had a good appearance on cable news. That has to end.

Knowing now who is advising Trump would go a long way toward making people comfortable that the mistakes of the past won’t happen again. It’s not just the public feuds with fired staff people were sick of, it was the leaking from untrustworthy hires. If after 4 years in office and all the learning that must have occurred, Trump can’t tell us who the trustworthy people he’d populate his administration with are, that’s an issue.

I bring this up because of the news that Trump invited the unstable Kanye West to have dinner with him at Mar-A-Lago last week. Why? There’s no good reason for it. They are “friends” like you are friends with the neighbor you waive to down the block – you’re friendly but would never invite the other over to watch a game.

Trump and West weren’t running buddies or regular meal companions, West just said nice things about Trump and that was enough. Trump likes having his ego stroked. As a former President who wants to return to that office, he needs someone around him to makes it clear that that is not enough for a dinner invite. Trump needs to demonstrate that he’s grown as a person, that he’s not the same narcissist leftists accuse him of being.

He also needs someone to keep the Kanye West show away. West bringing 2 self-promoting morons (you can decide for yourself if they’re anti-Semites or not, but I wouldn’t hang out with them and question any candidate who would) to dinner is one thing, having a staff that allows them in is another. And all the “I didn’t know who they were” excuses in the world don’t fly anymore; you’re a former President, not some naive rube who just fell off a turnip truck.

This is the latest and just another reason why so many people who absolutely loved the Trump presidency aren’t excited at the prospect of another term. They’re tired of all the BS that comes along with it. People hate $3.50 gas and high inflation, but they can get used to it. Democrats won the House and Senate in the 1978 midterms even with Jimmy Carter in the White House. No matter how bad he got, Democrats kept the House in 1980 even as Reagan crushed Jimmy.

People will still vote for bad candidates over good ones, vote against their own interest, if you don’t give them something to vote for. This last election showed that to be true.

If Donald Trump wants a chance of recapturing what he pulled off in 2016 he has to do it differently in 2024 because 2024 is different. He’s a former President, for one thing. He needs to start acting like it, at least a little. The people he needs the votes from to win are sick of the same old act, sick of the drama and the ego. They need to see something more from him or they will look elsewhere for it. They’re simply exhausted with the Trump Show of the past.

Derek Hunter is the host of a free daily podcast (subscribe!), host of a daily radio show, and author of the book, Outrage, INC., which exposes how liberals use fear and hatred to manipulate the masses, and host of the weekly “Week in F*cking Review” podcast where the news is spoken about the way it deserves to be. Follow him on Twitter at @DerekAHunter.