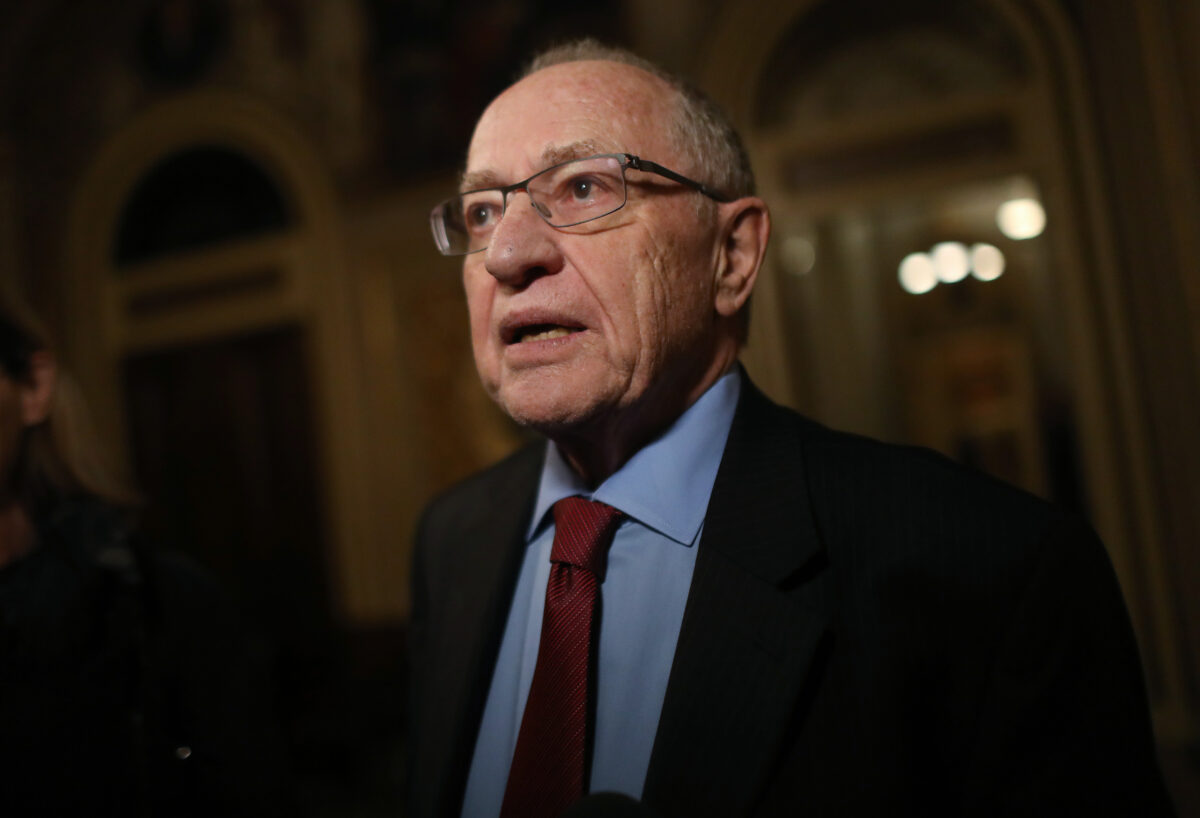 The raid on former President Donald Trump’s Florida home, Mar-a-Lago, may become a key moment in history—with implications felt by all Americans—depending on where the pendulum next swings, according to civil rights attorney Alan Dershowitz.

There seems to be a double standard at work, Dershowitz said.

He pointed to the treatment of Sandy Berger, a national security advisor to President Bill Clinton, who was fined and sentenced to two years of probation in 2005 for unauthorized removal of classified material from the National Archives, and Hillary Clinton, who kept classified intelligence community emails on an unsecured private email server in her home. She was not prosecuted.

“Why are different standards being applied?” Dershowitz said. “Why did they arrest and shackle people like Peter Navarro and Paul Manafort and Roger Stone, instead of just calling their lawyers and saying, ‘Have him show up for an arraignment in a day or two.’ That’s the way it’s usually done. What we’re seeing is probable cause that a double standard has been applied to Trump and to Trump loyalists.”

Protecting the Right to Vote

Although Dershowitz represented Trump during his 2020 Senate impeachment trial, he says he is not a Trump loyalist and didn’t vote for him. But he does not want to see Trump disqualified from running, because voters have a right to vote for the candidate they want.

“I don’t want to see the American system of elections distorted by bureaucrats saying, ‘Oh no, you can’t run.’ I don’t want Congress passing laws saying certain people can run, certain people can’t run,” he said. “That would violate separation of powers and the text of the Constitution itself, which provides only four criteria for running for [president]: you have to be over 35, you have to be born in America, you have to not have fought in the civil war against the Union, and you have to not have been removed from office with disqualification voted by the Senate.”

None of those criteria were violated in the case of Trump, Dershowitz said.

“It’s ‘Get Trump at any cost. Don’t let him run. Make sure he can’t run, no matter how much you have to trash the Constitution.’”

This is what happens when partisanship prevails over principle, he said.

“Principles are established by precedent. Once the precedent is established that you can use the search as a first recourse rather than a last recourse, you can go after people based on their politics, not based on the relative culpability of the crime,” he said. “It can happen to anybody, and it has. We’ve seen more use of these draconian techniques. It’s easily possible that local prosecutors will pick this up.”

“Remember, U.S. attorneys all over the country are under the control of the attorney general of the United States, who has justified this and said this was permissible,” Dershowitz said. “He didn’t give us an explanation for why it was, but he justified it. And that’s very worrisome to the average American.”

A Subpoena Should Have Sufficed

Dershowitz views the search warrant as probable overreach. After the search warrant was executed, Attorney General Merrick Garland said the usual process in the Justice Department is to go by less intrusive methods and use the search only when absolutely necessary.

“I have been doing this for 60 years, and I don’t see any possible reason for why they couldn’t go by a subpoena. If they wanted the material back, you subpoena for that. That’s the usual way of getting material back,” Dershowitz said. “If you want to get documents, you issue a subpoena, and then the other side protests and says, ‘No, this is not classified. This was declassified. This is lawyer client privilege. We’re invoking the Fifth Amendment about production of this,’ and you litigate. You go to court. You litigate. You don’t just grab the material and then say, ‘I got it. And now you have to litigate.’”

The Mar-a-Lago raid had two opposing effects. It has both bolstered and hushed Trump supporters, and those who care about the rule of law.

“In places where there are lots of people on the left and liberals, they all just shut up. They write to me and say, ‘Why are you speaking out? If you just shut up, people would approve of you. But if you’re speaking out, and it seems to be benefiting Trump, we’re not going to talk to you.’ It’s very easy to remain silent,” he said.

But others have been emboldened by the raid.

Dershowitz believes speaking truth is the right thing to do, and he details some of the consequences he has faced—being cancelled for sticking to principals instead of politics—in his most recent book, “The Price of Principle: Why Integrity Is Worth the Consequences.”

In it, he explains that principled people are actively punished for not being sufficiently partisan, and that today, partisan ends justify unprincipled means, such as denial of due process and free speech in the interest of achieving partisan or ideological goals.