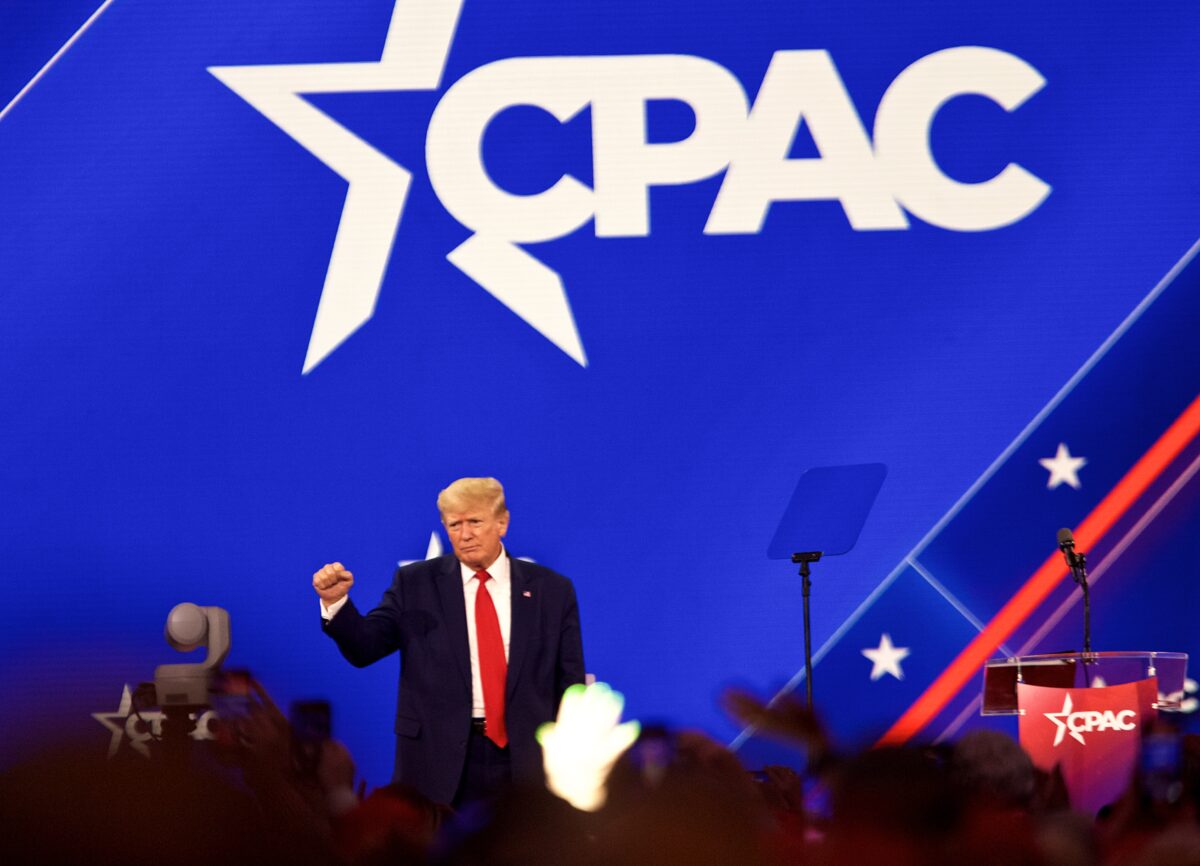 Trump made the remarks during a speech to an audience of some 5,000 attendees as the final speaker at the Conservative Political Action Conference (CPAC) in Dallas on Saturday.

In a straw poll, conservatives gave Trump a 99 percent job-approval rating, and 69 percent said they would support him as their Republican presidential nominee for 2024. Florida’s Ron DeSantis came in a distant second at 24 percent.

The former president, who has all but announced his intentions to run again in 2024, predicted that the Democrats’ so-called Inflation Reduction Act will cost Manchin and Sinema their seats in the U.S. Senate.

Trump said the massive spending bill will exacerbate inflation, which already sits at a 40-year high.

Trump overwhelmingly carried West Virginia in the 2020 election but narrowly lost in Arizona—one of the states where concerns were raised about election irregularities.

Trump had vowed to campaign against Manchin if the senator passed the bill, which conservatives and others see as being at odds with the interests of many livelihoods in the coal-producing state.

“We had the greatest economy in the history of the world. We had no inflation,” Trump said, adding that President Joe Biden’s inflation is already costing families thousands of dollars per year.

Trump’s policy proposals in the speech included making cities safe, instilling the death penalty for drug traffickers, re-securing the border, and abolishing the Department of Education.

“The election was rigged and stolen, and now our country is being systematically destroyed,” Trump said.

The first job the next Congress and administration should tackle is restoring public safety, Trump added, pointing to Chicago’s high murder rate and violence that locals say is ripping their neighborhoods apart. He added that in California people leave their vehicle trunks open so thieves can take what they want without destroying their cars; and thugs in Los Angeles stalk people at gunpoint and follow them home to burglarize their residences.

The streets in Democratic-run cities need to be cleaned up, Trump said, adding that if liberals think it’s not compassionate to move the homeless off the streets, then they should invite them to camp in their backyards.

“Every American of every background deserves to live in peace,” Trump said. “It’s also time to take back our streets and public places from the homeless and the drug addicted and the dangerously deranged.”

But while criminals are allowed to run wild, police are being demonized, the former president lamented. Trump said that Republicans must hire more police and let them do their jobs. Instead of taking guns from law-abiding citizens, the government needs to take them away from violent felons and career criminals, he added.

Trump said that drugs are flooding into America and suggested that the problem could be solved with stricter laws like those in China and Singapore.

“If you look at countries throughout the world, the only ones that don’t have a drug problem are the ones that institute a death penalty for drug dealers,” Trump said.

Trump, who put in place dozens of policies meant to secure the border during his presidency, lambasted Biden for the influx of illegal immigrants pouring over the southern border.

Once Republicans regain control of Washington, Trump said that illegal immigrants need to be caught and sent back to their countries, prompting cheers from the crowd. He called for hiring a record number of new border patrol and ICE officers to deal with the border crisis.

“We will quickly send you back to the place from which you came or put you in prison immediately,” Trump said.

Parental rights must be restored in America, Trump said, saying that while school prayer is banned, drag queens are allowed to perform in front of children. Children must be protected from Marxist indoctrination and sexualization, he added.

“We should abolish the Department of Education,” Trump said to wild applause.