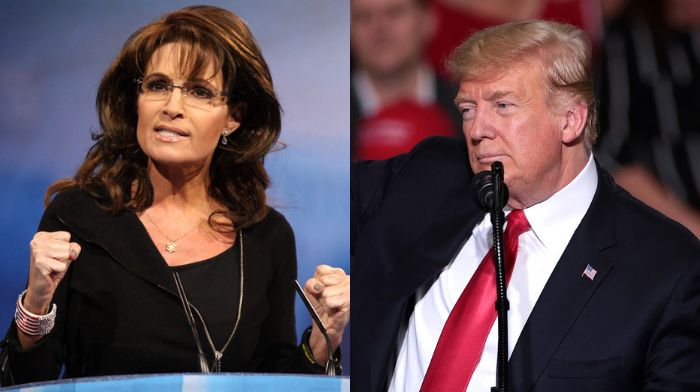 Tshibaka is running against incumbent Republican Lisa Murkowski, who made Trump’s target list when she joined Democrats in voting to convict him in his impeachment trial over the Capitol riot.

President Trump is having a rally in Anchorage, Alaska, on July 9th.

He’s serious about defeating Lisa Murkowski & I’m loving every second of this.

RELATED: Dr. Ben Carson Defends Clarence Thomas From Attacks By Hillary: For Liberals ‘Only Thing worse Than Satan Is A Black Conservative’

Palin and a whopping 48 other candidates were in the original running for Alaska’s lone House seat, which was left vacant by the death in March of Rep. Don Young (R-AK), who held the seat for 49 years.

Palin, as a former Governor, has of course already won a statewide election in Alaska, and has the star power and name recognition of having been the Republican Party’s candidate for Vice President in 2008.

The top four finishers from the special primary election will now go on to the special election on August 16. The winner will serve out the rest of Young’s term.

Murkowski has accused the Trump-endorsed Tshibaka of being a “rubber-stamp Republican,” and seemingly does not regret her impeachment vote. She said of Tshibaka:

“I may be the last man standing. I may not be reelected. It may be that Alaskans say, ‘Nope, we want to go with an absolute, down-the-line, always, always, 100-percent, never-question, rubber-stamp Republican.”

“I was honored to receive President Trump’s endorsement early on in this race, and I’m excited to welcome him to the great state of Alaska,” Palin said in a statement released soon after Trump’s rally was announced.https://t.co/36zW9rLpPD via @AKPublicNews

Establishment and never-Trump Republicans wish the former President would just go away, but that is not what candidates who are vying for his endorsement seem to be saying. Trump-endorsed candidates have been racking up primary wins all over the country, and this past Tuesday’s slate of primaries was no exception.

In Colorado, Lauren Boebert won with 65% of the vote. In Illinois, State Senator Darren Bailey won and will go up against incumbent Gov. J.B. Pritzker and the Democrat machine there.

Also in Illinois, Reps. Mary Miller (R-IL) and Rodney Davis (R-IL) went up against each other for a redrawn district. Trump-endorsed Miller emerged the winner in that race.

In Oklahoma, Gov. Kevin Stitt won with 69% of the vote. and in Utah, Sen. Mike Lee and Rep. Burgess Owens both won primaries each garnering 61% of the vote in their respective races.

So far, 30 Trump endorsed candidates have won their primaries. Others do not take place until August.

There’s nothing better than a Saturday night Trump rally!

RELATED: Biden On How Long Americans Can Expect To Pay High Gas Prices – ‘As Long As It Takes’

Many Who Voted To Impeach Won’t Be Back

Perhaps the most-watched of those upcoming primaries will be in Wyoming, where Liz Cheney is being challenged by attorney Harriet Hageman, who was endorsed by Trump.

Currently, Hageman is ahead in the polls over Cheney by 30 points. CNN recently gave Cheney a 10% chance of winning reelection.

For The First Time Ever

45th President Trump is going to have a rally in