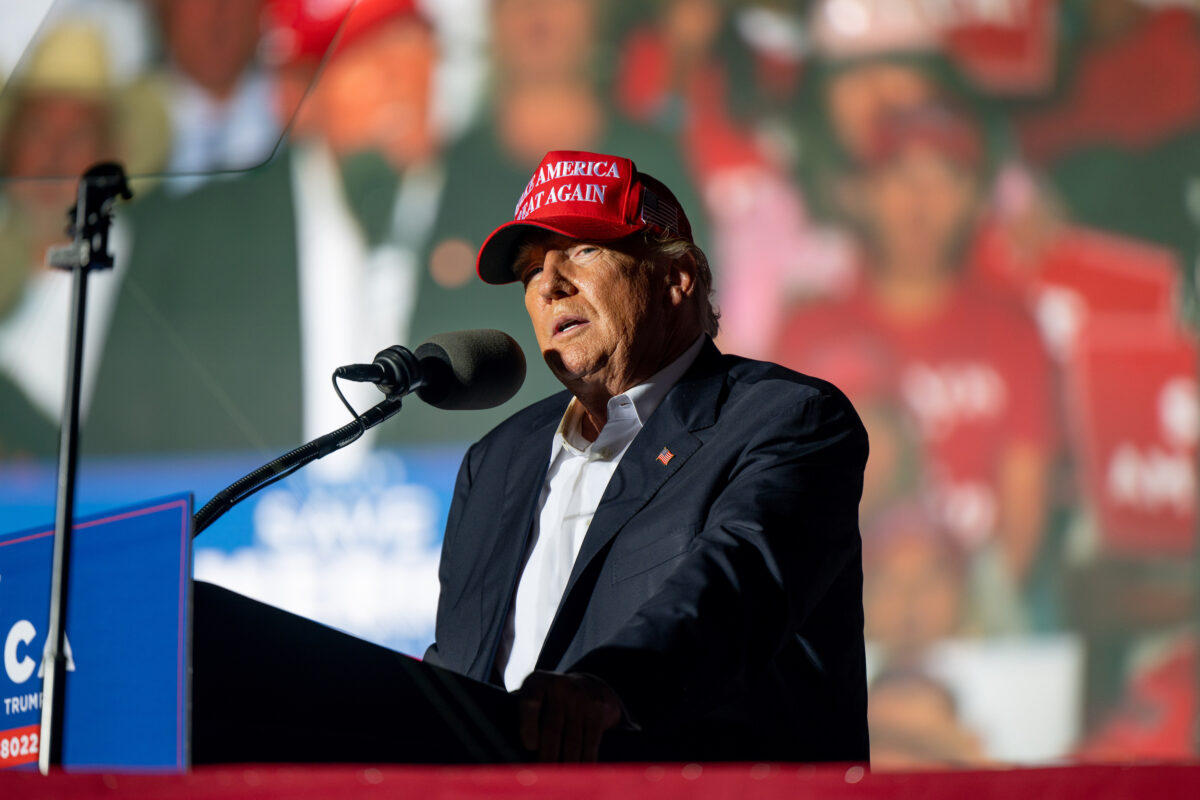 Former President Donald Trump is set to go on a rally blitz for candidates he has endorsed in at least four battleground states during the final days before the Nov. 8 midterm elections.

Trump is scheduled to hold rallies in Iowa, Pennsylvania, Florida, and Ohio in the span of five days until the eve of the elections, according to separate press releases issued through the Save America political action committee on Oct. 26.

The first stop is Sioux City, Iowa, on Nov. 3, when Trump is scheduled to “advance the MAGA agenda” by campaigning for Republicans including Iowa Gov. Kim Reynolds and Sen. Chuck Grassley (R-Iowa), both seeking reelection to their current positions.

Two days later, Trump will hold a rally in Latrobe, Pennsylvania, lining up behind state Sen. Doug Mastriano for governor and Mehmet Oz for Senate in the Commonwealth.

On Nov. 6, Trump is scheduled to hold a “Get Out the Vote Rally” in Miami, Florida, stumping for Sen. Marco Rubio (R-Fla.), who is facing Democrat challenger Val Demings.

Finally, Trump’s fourth rally is set to be held in Vandalia, Ohio, on Oct. 7, when the former president is slated to campaign for GOP candidates including J.D. Vance, who is seeking to replace retiring Sen. Rob Portman (R-Ohio).

The upcoming rallies come on the heel of a “Save Amerca” rally in Robstown, Texas, on Oct. 22, during which Trump told supporters that choosing whom to vote for is not difficult.

“The choice this November is simple. Democrats will defund the police, Republicans will defund the cartels,” Trump said. Mexico cartels have been buying precursor chemicals from China to make fentanyl and ship finished products to the United States.

Early voting has begun in many states. As of Oct. 26, more than 13.2 million people have voted early, either in person or by mail-in ballot, in the 2022 general election, according to data from the U.S. Elections Project, which is run by the University of Florida.

Pennsylvania is one of the key states that will decide if Republicans can retake the upper chamber of Congress, and Oz is closing his gap with Democrat Lt. Gov. John Fetterman. According to the RealClearPolitics polling average, Fetterman led by 4.1 percentage points on Oct. 1, but that lead has dwindled to 1.3 percentage points as of Oct. 25.

On Tuesday night, Oz and Fetterman held their first and only debate, and the two candidates sparred over a number of issues including abortion, crime, and the economy. The current Pennsylvania lieutenant governor, who is still recovering from a stroke in May, struggled with his words during the debate.

Eighty-two percent picked Oz as the winner of the debate, while 18 percent chose Fetterman, according to an online snap poll by Pittsburgh TV station WPXI.

Fetterman’s campaign team told media outlets in a statement after the debate that the Democrat delivered a “strong debate performance.”

A day after the debate, Oz talked about the fentanyl crisis in his state during an event in Harrisburg as part of his “Safer Streets” campaign.

“The state troopers just told me they confiscated last quarter seven times more fentanyl than they did in 2020. Seven times increase, all of it because we’re aiding and abetting, inadvertently, cartels which are really terrorist organizations bringing narcotics here,” Oz said. “I vow here and now that as a U.S. senator, I will do the right thing for our communities.”

Vance, in a statement on his Facebook page, welcomed Trump’s return to Ohio on Nov. 7.

“No one in the world gets Ohioans fired up for Election Day like President Trump! It will be great to host him in Ohio again,” Vance wrote.

Trump campaigned for Vance at a rally in Youngstown, Ohio, in September, during which the former president said he was fighting persecution by the “sick and deranged political establishment.”

In a poll (pdf) conducted between Oct. 14 and 19, Spectrum News and Siena College found that Vance and Ryan were at a deadlock with 46 percent support each.

The poll also found that 68 percent of Ohio voters—including 40 percent of Democrats, 90 percent of Republicans, and 72 percent of Independents and others—said the United States was heading in the wrong direction. Twenty-three percent said the nation was on the right track.

Both candidates recently took to Twitter to say what they would do if elected.

“When I get to the United States Senate, I’ll vote to restore Roe and ensure that every woman is free to make the health care decisions best for her life, family, and future,” Ryan wrote on Oct. 25.

On Oct. 20, advisers to the Centers for Disease Control and Prevention voted to add most COVID-19 vaccines available in the United States to the childhood and adult immunization schedules. After the vote, Vance called the decision “an atrocious policy.”

“In the Senate I’ll make sure that parents make these decisions,” Vance wrote.

In Florida, Rubio has a comfortable lead over his opponent. According to the RealClearPolitics polling average, Rubio is leading Demings by 7.4 percentage points.

According to a poll (pdf) released on Oct. 26 by the University of North Florida’s Public Opinion Research Lab (PORL), Rubio picked up 54 percent of support, leading Demings by 11 percentage points.

“Demings has raised a lot of money and has been on the attack for months, but Rubio is up double digits,” said Dr. Michael Binder, PORL faculty director in a statement accompanying the poll. “Florida has become a red state, it will likely take an exceptionally weak Republican candidate for Democrats to win statewide–and Rubio is not a weak candidate.”