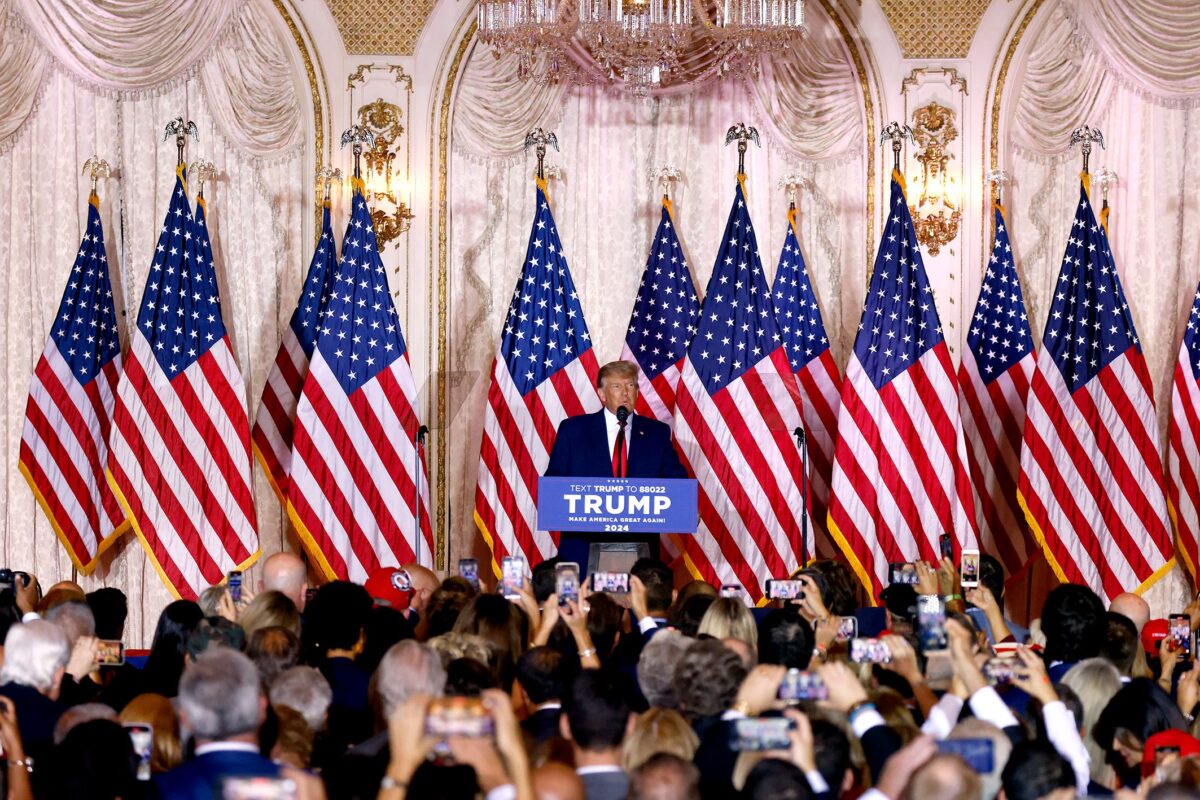 One of the most recognizable figures in the world, Donald Trump officially launched his quest to duplicate a feat accomplished by another former president who, until now, has been mostly forgotten.

Declaring that “America’s comeback starts right now,” Trump announced his candidacy to run for president in 2024 during a prime-time address at his Mar-a-Lago estate on Nov. 15.

If he prevails, Trump will join Grover Cleveland as the only president to leave the White House and return for a second term four years later.

Martin Van Buren and Herbert Hoover were unable to regain the Republican nomination following defeats after their first term. Theodore Roosevelt’s progressive movement alienated him from the GOP, and his quest to ascend to the presidency again as a third-party candidate was unsuccessful.

Cleveland, who was governor of New York and the former mayor of Buffalo, was first elected president in 1884 before losing in 1888 and winning again in 1892.

He was also the first Democrat elected president after the Civil War.

The history books often laud Cleveland for his honesty. In 1884, he narrowly defeated James G. Blaine to earn his first term. A bachelor when he was first elected, Cleveland was 48 when he took office in 1885. A year later, he married 21-year-old Frances Folsom and became the only president who was married in the White House. His first child was born in the White House, too, which has not happened since.

During his first term, he cracked down on railroad companies that illegally annexed federal land in the west and signed the Interstate Commerce Act into law. This was the first measure to establish federal regulation of the railroads and led to the creation of more government agencies.

Cleveland also signed the Dawes Act of 1887, which authorized the government to break up tribal land. This resulted in taking away more than 90 million acres of tribal property from Native Americans and selling the land to U.S. citizens who were not Native Americans.

When the time arrived for Cleveland to seek a second term in 1888, he appeared to lack enthusiasm for his campaign.

He told a friend that “I sometimes think that perhaps more enthusiasm would have been created if somebody else had been nominated after a lively scrimmage at St. Louis,” where the party’s convention was held.

Though he won the popular vote, Cleveland was defeated by Republican Benjamin Harrison in the general election. He and his wife moved to New York City, where he basked in retirement. He became a father and told a colleague that he “had entered the real world” for the first time.

Life as a private citizen proved unfulfilling for Cleveland, and he saw an opportunity to defeat Harrison in a rematch because the president had grown unpopular with many Americans. He received his party’s nomination and won his rematch against Harrison.

Troy Senik was a speechwriter for President George W. Bush and Speaker of the House Newt Gingrich. His book, “A Man of Iron: The Turbulent Life and Improbable Presidency of Grover Cleveland,” was released in September.

“Grover Cleveland was precisely the kind of self-made, scrupulously honest man that Americans often say they want as their president,” Senik writes. “We had him for eight years. And, somehow, we forgot him.

“He was not a master strategist like Lincoln, a frenzied crusader like Theodore Roosevelt, or a philosopher-king like Thomas Jefferson,” Senik added. “He was, in many ways, ordinary. And that was where his greatness resided.”

Cleveland’s second term was marked by a depression and controversial decisions.

In late June 1894, Cleveland signed legislation that established a national Labor Day holiday in early September. A few days later, he summoned federal troops to Chicago to enforce an injunction against a railroad workers’ strike and squash the uprising, leaving around 30 people dead.

“If it takes the entire army and navy of the United States to deliver a postcard in Chicago, that card will be delivered,” Cleveland exclaimed.

Cleveland faced backlash for his treatment of the railroad workers, and his policies amid a depression during his term were mostly unpopular.

Bryan was defeated by William McKinley, who became the 25th U.S. president, only to be assassinated by an anarchist in 1901.

After leaving the White House, Cleveland lived in retirement in Princeton, New Jersey. He died in 1908.

Van Buren, who was secretary of state and vice president under Andrew Jackson, served as president from 1837 to 1841 before he was defeated by William Henry Harrison. Van Buren ran again in 1848 as the Free Soil party nominee but lost to Zachary Taylor.

Many historians rank Theodore Roosevelt as one of the most popular presidents in American history. He was 42 when he was sworn in as the youngest president at the time following McKinley’s assassination.

Roosevelt occupied the White House from 1901 to 1909 and groomed William Howard Taft to be his successor. Displeased with Taft’s brand conservatism, the legendary Rough Rider unsuccessfully pursued the Republican nomination in 1912 and then decided to run as a third-party candidate, losing to Democrat Woodrow Wilson.

Hoover was the last candidate who tried to return to the White House after serving a four-year term and losing in his first re-election bid.

Until Trump was elected president in 2016, Hoover was the first chief executive who had never held elective office or served in the military.

Hoover, a Republican, was Secretary of Commerce under President Calvin Coolidge, who decided not to seek re-election. Hoover promised an end to poverty when he ran for president in 1928 against Democrat Al Smith. He was elected, but the same year he took office, the stock market crashed.

As the Great Depression raged, Hoover encouraged businesses to keep workers and maintain wages, and he implemented loans to struggling banks and farmers, but it wasn’t enough. The economic collapse was marked by unemployment and homelessness. Shantytowns sprouted across the country that became known as “Hoovervilles.”

When the 1932 election arrived, and Hoover faced Franklin D. Roosevelt, one in four Americans was out of work.

Hoover was an engineer and a millionaire who saw himself as self-made and viewed Roosevelt as an elitist both in status and wealth.

Promising Americans a “New Deal,” Roosevelt trounced Hoover in a landslide by a margin of 7 million votes.

Hoover didn’t fade away into obscurity after his loss. Instead, he emerged as an outspoken opponent of Roosevelt’s policies. In 1940, Hoover pursue the Republican nomination, but the party selected progressive businessman Wendell Wilkie.

Until Trump announced his candidacy to run in 2024, it was the last time a president who lost after a four-year term embarked on a comeback.

Over the years, some Congressional members have attempted to repeal the 22nd Amendment, but resolutions have never passed through committee, according to the National Constitution Center.