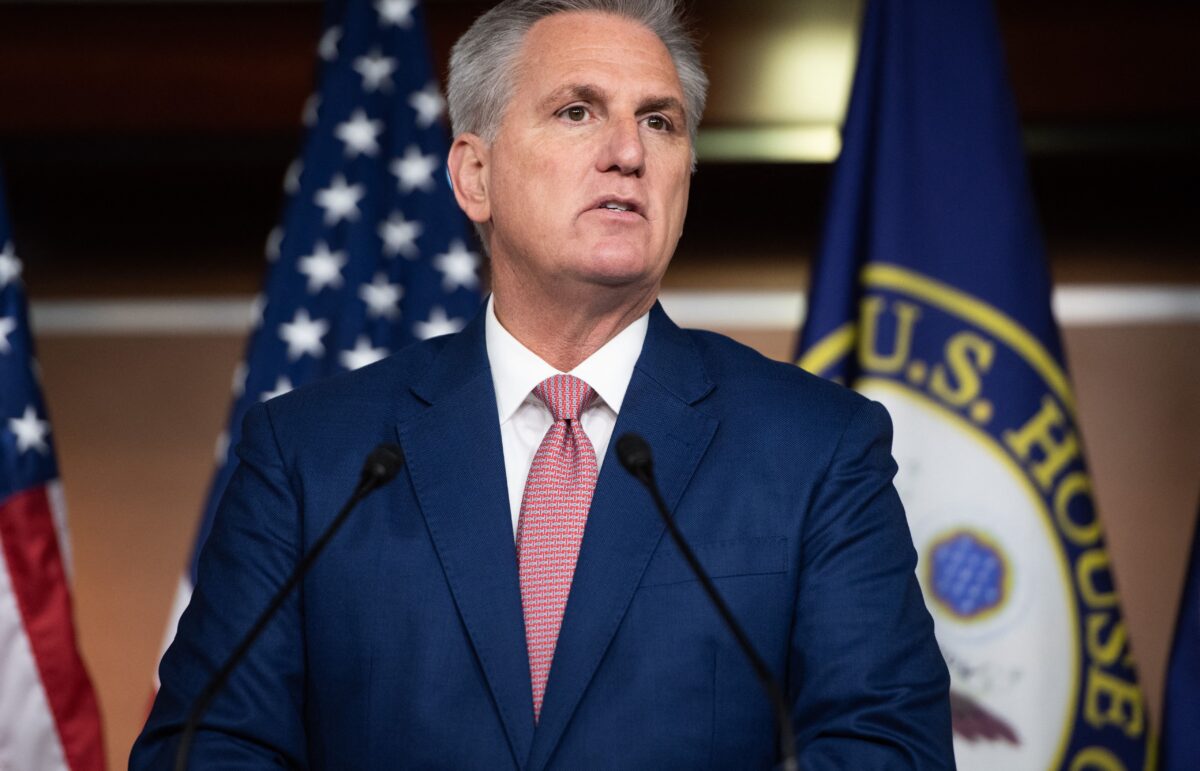 Members of the Congressional China Task Force met with Taiwan’s ambassador July 20 to discuss how the United States could best prevent an invasion of the island by Chinese Communist Party (CCP) forces.

Republican leadership took the opportunity to underscore the threat posed to the United States by the CCP’s authoritarianism, and to outline why and how the nation ought to provide Taiwan with the means to defend itself from aggression.

“Since 2020, this task force has worked diligently to raise awareness of the threat posed by the Chinese Communist Party, which is the greatest geopolitical threat facing America and our friends in the Indo-Pacific,” House Minority Leader Kevin McCarthy (R-Cali.) said.

“The CCP has shown itself to be a ruthless, aggressive, and evil dictatorship. We cannot underrate its goal to control through force and brutality.”

McCarthy said that Taiwan’s democratic government and way of life was worth preserving for its own sake, but also noted its immense strategic value to the United States.

Taiwan accounts for the production of more than 60 percent of the world’s semiconductors, used in everything from personal computers to hypersonic missiles. It is also situated in the first island chain, just east of mainland Asia, access to which is vital for international supply lines.

“Taiwan warrants our support because it is a vibrant, thriving democracy,” McCarthy said. “It’s people want peace, freedom, and the right to determine their own future.”

“Supporting Taiwan is right and it is in America’s best interest.”

‘A Matter of Survival’

The CCP claims that Taiwan is a breakaway province, though Taiwan has been self-governed since 1949 and has never been controlled by the CCP. Its de facto independence is a frequent sticking point in Sino-American relations, as the United States is bound by the 1979 Taiwan Relations Act to provide the island government with enough arms to maintain its self defense.

Taiwan Ambassador to the United States, Bi-khim Hsiao, welcomed the task force’s efforts to ensure that it received those arms.

Moreover, Hsiao warned that the CCP’s “malign behavior” did not just pose an ideological threat to Taiwan, but an existential one.

“Some might see a critique of authoritarianism as a competition of political systems,” Hsiao said. “But for Taiwan, this is a matter of survival. The survival of maintaining our freedoms and our democratic way of life.”

Hsiao’s comments were reminiscent of those made by former U.S. defense secretary Mark Esper just last week, who warned that the survival of the Taiwanese people was at stake in a broader conflict of “communism versus democracy.”

Hsiao said that continued U.S. support was essential to ensuring stability across the Taiwan Strait, and to curbing the influence of the CCP’s “hybrid toolkit of economic and political leverage,” with which the regime has attempted to isolate Taiwan from the rest of the world.

“Though we stand on the front line of facing such coercion, it is clear that these actions also threaten the peace, stability, and prosperity of the broader Indo-Pacific region and the world,” Hsiao said.

“Taiwan is committed to defending our homeland and our hard-earned democratic freedoms, but we also need friends and partners to work together in ensuring that our shared values and common interests are protected.”

To that end, Hsiao said that Taiwan was working to expand its circle of friends and partners with democracies from across the world.

Mere friendship, however, is unlikely to prevent a CCP invasion of Taiwan. McCarthy and the rest of the China Task Force recommended increasing arms sales to Taiwan, including in joint military exercises and expanding commercial trade lines between Taiwan and the United States.

Only through proactive measures will Taiwan’s democracy be assured, the task force agreed.

“Deterrence comes before conflict, not after” McCarthy said.

That focus on deterrence weighed heavily on the task force’s discussion with Hsiao, given the ongoing war in Ukraine that was largely seen by those present as the result of a total failure to deter Russian aggression.

“We need to do everything we can to arm Taiwan now and not make the same mistake we made in Ukraine and wait until after an invasion,” said Rep. Michael McCaul (R-Texas), who chairs the task force.

As it turns out, however, “right now” is a tricky thing to accomplish. Indeed, both McCaul and his colleague, Rep. John Gallagher (R-Wis.), noted the immense delay in delivering U.S. arms to Taiwan, even after sale was approved by Congress.

“I signed off on foreign military sales three years ago that have yet to be delivered to Taiwan,” McCaul said.

Likewise, Gallagher said that the United States’ newest shipment of 404 Harpoon missiles and their respective launchers and equipment, would not be completed until 2028.

U.S. military leadership, meanwhile, has warned that a CCP invasion of Taiwan could come as early as 2027.