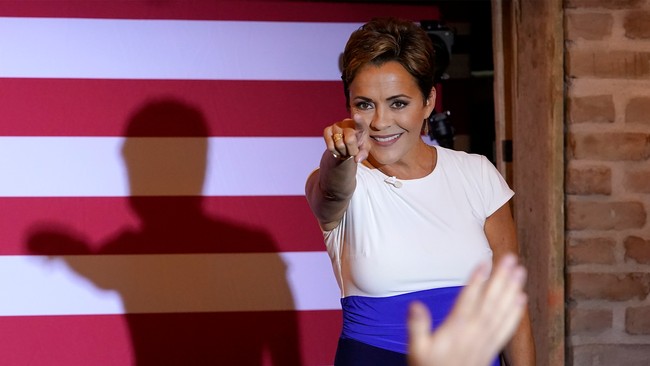 All eyes are on the House and Senate as we hurtle toward Election Day. But if the past two years have shown us anything, state races are just as crucial because of the impact they have on Americans’ daily lives. That’s why I’m excited about our outstanding Republican gubernatorial nominees and the opportunity we have to win key governors’ offices from coast to coast. Now, it’s up to voters to show up for them on November 8th.

Republican governors already have a proven record. They’re clear-eyed about America’s crime crisis and are proud to back our men and women in blue. They aren’t afraid to secure our border, garnering the support of our brave border agents. They’re working to champion parental involvement in education, expand school choice, and purge woke activism from classrooms. And Republicans know how to get Americans back to work. The latest data shows that Republican governors lead 17 of the top 21 states with the lowest unemployment rates. This is the leadership Americans crave.

In Arizona, Republican Kari Lake is taking the Grand Canyon State by storm. A former journalist, she’s holding the media accountable for their biased coverage. She’s speaking to the issues Arizonans care about most—inflation, gas prices, and the border crisis. And she’s calling out Democrat Katie Hobbs for dodging and ducking debates and voters. It’s no wonder Hobbs is staying out of the limelight. She’s on record supporting unlimited abortion and backing the Bidenflation scam bill, radical positions out of step with Arizona voters.

Next door, New Mexico Republican Mark Ronchetti is shining a light on Democrat Gov. Michelle Lujan Grisham’s destructive four years in office. From surging crime and an out-of-control fentanyl crisis to abysmal school test scores thanks to some of the strictest pandemic restrictions in the nation, New Mexico is suffering. Families deserve better, and Ronchetti’s freedom-oriented vision can deliver.

It’s a similar story in the Midwest, where Kansas Republican State Attorney General Derek Schmidt is taking on Democrat incumbent Laura Kelly. She bills herself as bipartisan, but her record says otherwise. She twice vetoed legislation that would have banned biological males from competing in women’s sports. She’s promised to block pro-life efforts in her second term. And her administration went out of its way to use taxpayer dollars to fund a drag show for young children. This isn’t what Kansans stand for.

And neither do Oklahomans. While Gov. Kevin Stitt has been a reliable defender of unborn life, women’s sports, and a pro-business environment, his Democrat challenger Joy Hofmeister has a record of bringing Biden’s radical policies to the Sooner State. As state superintendent of public instruction, Hofmeister forced Oklahoma schools to allow biological males to use female restrooms. The Biden administration praised her for opposing parental choice in school masking. And she’s stood with Biden’s war on American energy, backing higher taxes on oil and gas. These are the politics of a deep-blue California governor, not someone trying to win over Oklahomans.

In my home state of Michigan, Tudor Dixon is ready to hold Democrat Gov. Gretchen Whitmer accountable for her draconian lockdowns. She closed the state down with economy-killing restrictions, forcing 32% of Michigan businesses to shutter and imposing nonsensical restrictions. She kept students out of school for months, leading to Michigan landing in the bottom 20 states for getting kids back to in-person schooling. She’s vetoed every inflation relief bill the legislature has sent to her desk, from lowering the income tax to creating a child tax credit. Worst of all, she’s a hypocrite. That’s the condescending arrogance that’s earned her a serious challenger. Dixon has promised to rebuild the economy, protect Michigan’s energy industry, and give parents a voice in education—and Michiganders agree.

Tides are turning in Minnesota, too, where Republican Scott Jensen is rapidly catching up to Democrat Gov. Tim Walz. Jensen’s plan to tackle crime, inflation, and corruption in education is resonating. And in Wisconsin, Tim Michels is giving failed Democrat Gov. Tony Evers a run for his money. With theft and homicides soaring in the state, Wisconsinites are desperate for change and Michels offers commonsense leadership.

There’s even a beacon of hope on the East Coast, where polling shows Republican Lee Zeldin pulling ahead of New York Gov. Kathy Hochul. New York’s crime crisis—coupled with surging inflation—has Democrats’ base crumbling. Independents, unaffiliated voters, and Hispanics are fed up with Democrats’ out-of-touch agenda and are breaking for Zeldin.

In fact, Americans all over the country are fed up with Democrats. They understand that electing left-wing politicians to state office would only bring Biden’s destructive policies closer to home. That’s why it’s so important that Americans turn out on November 8th. Make a plan to vote, bring friends to the polls, and hold Democrats accountable. Election Day can’t come soon enough.