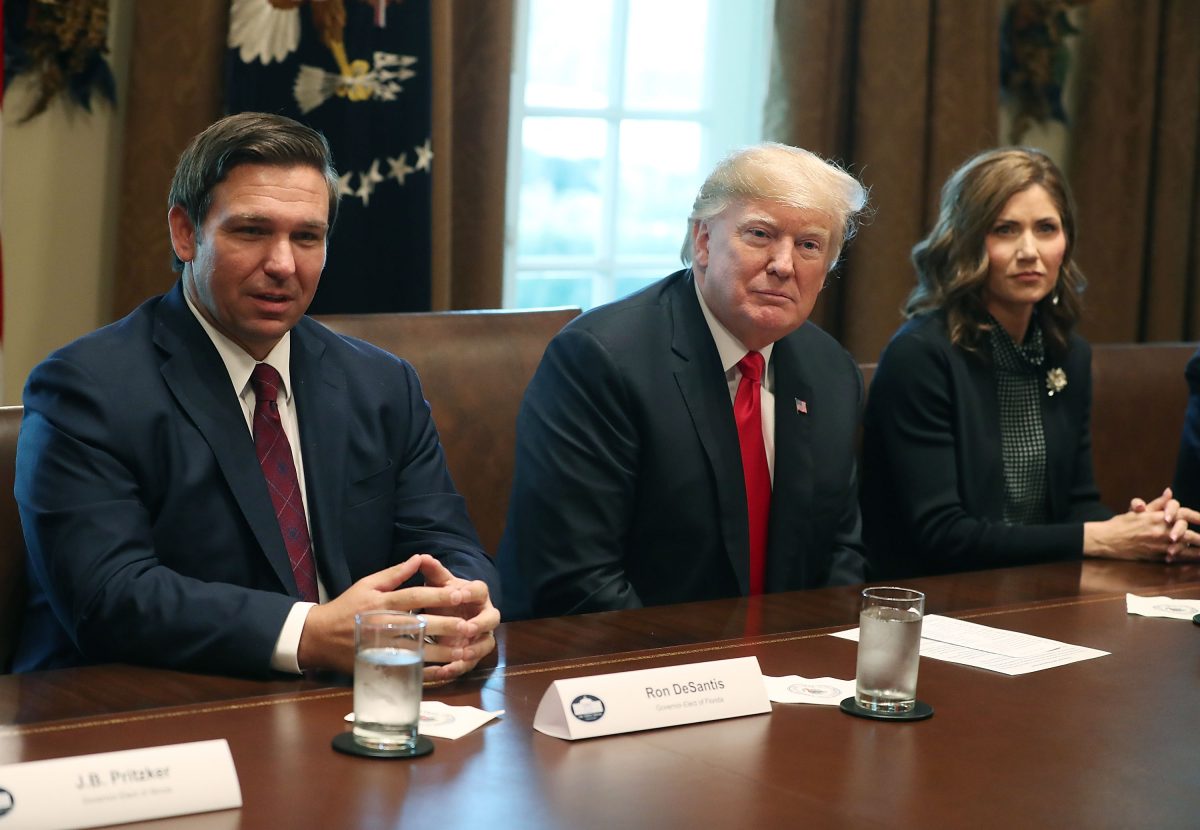 Amid an ongoing deluge of negative economic data, analysts and strategists looking at the field of potential GOP contenders for the nomination in 2024 say that the public is increasingly fed up with the state of the economy and is not really concerned with whether a candidate has run for or held high office in the past. Rather, they are far more interested in anti-establishment credentials and the ability to alleviate desperate economic conditions.

With inflation now at a 40-year-high of 9.1 percent, ongoing supply-chain problems, and official data on July 28 showing the country slipped into a technical recession with gross domestic product (GDP), a key indicator of prosperity, dropping 0.9 percent in the second quarter of the year on the heels of a 1.6 percent fall in the first quarter, the midterm elections in November are increasingly seen as a referendum on the incumbent party’s economic performance.

But the Democrats appear likely to pay a price for voters’ frustration well beyond the midterms, and the question for 2024 is which GOP candidate can fix the economy, experts say. This fosters opportunities for political outsiders without experience in cabinet-level positions, they maintain.

No Shoo-In for Pence

While some might assume a onetime vice president to be one of the more obvious choices in a primary race, and while former Vice President Mike Pence may enjoy the highest levels of name recognition compared to others in the party whose names come up often in discussions of possible 2024 matchups, such as Florida’s Governor Ron DeSantis, Maryland’s Governor Larry Hogan, Senator Tom Cotton of Arkansas, and former Secretary of State Mike Pompeo, Pence has not emerged unscathed from conflicts in the past with then-President Donald Trump over certification of the 2020 election results, observers say.

“Trump’s constant attacks on Pence for not going along with his plans to overturn the Electoral College results have damaged Pence with Republican voters, presumably hard-core Trump supporters. If you look at the polling, Pence has a relatively high unfavorable rating among Republicans. Pence isn’t viable with DeSantis and Trump in the race,” Keith Naughton, principal of Silent Majority Strategies, a consultancy based in Germantown, Maryland, told The Epoch Times.

“Trump has damaged Pence enough within the GOP to make it difficult for him to be the alternative, particularly since DeSantis has become popular and has a lot of momentum,” Naughton added.

While acknowledging that Pence is widely known and enjoys broad support among Christian conservatives, Feehery sees Pence’s falling out with Trump as one of a thicket of liabilities facing Pence should the former vice president enter the race.

“I think Pence’s problem is that all the Trump people hate him, and he wasn’t that great on COVID-19, and he’s part of the mess. I think people see him as more of an establishment figure,” Feehery said.

As for Pompeo, Feehery acknowledges that the former secretary of state brings foreign policy credentials to the table that other potential 2024 candidates lack.

“Pompeo can say that he’s got some experience on the national security front, and that’s always a very powerful advantage to have,” Feehery said.

At the same time, Pompeo’s image as a staid, establishment figure may not endear him to voters tired of the economic debacle and hungry for change, Feehery observed.

In Naughton’s view, DeSantis stands as the clear GOP frontrunner, even in a field where Trump is all but certain to run again.

“Trump will face a legitimate primary challenge. He has been running for over a year. I find all the ‘will he, won’t he’ speculation over the past year ridiculous,” Naughton told The Epoch Times.

Given the damage to Pence’s prospective candidacy inflicted by the quarrel with Trump, there are few figures in the party with the same momentum that DeSantis now commands, Naughton believes. While Governor Hogan of Maryland has things going for him, he is not in anything close to DeSantis’s league at this juncture.

“Hogan is a moderate never-Trumper, who will not get much voter support outside of Maryland. Hogan could have some decent fundraising among the never-Trumpers and Democrats, but he is not a serious threat,” Naughton said.

Nor does Naughton see Pompeo as posing a serious challenge to others in the field.

“I don’t think Pompeo runs if Trump gets in [the race]. With Trump out, he may run. His problem—and that of most others—is that DeSantis is so far ahead. Pompeo is, at best, at 1 percent today. DeSantis is in the upper 20s and even beats Trump in Florida,” Naughton said.

The 2024 election is still more than two years away and the number of potential GOP contenders may grow significantly in the intervening time, believes Brian Domitrovic, Richard S. Strong Scholar at the Laffer Center and a professor of history at Sam Houston State University. But it is those outside the establishment who may well have the best shot.

“We’re going to have a parade of candidates closer to the election. But it’s going to be a very important election in terms of fiscal policy, and I don’t know that the electorate, which is going to be in a reform mood, will be so concerned about policy credentials,” Domitrovic told The Epoch Times.

Domitrovic sees parallels between the current political juncture and certain periods of American history when candidates who promised to shake things up met a rousing reception.

“Ronald Reagan didn’t have any economic credentials to speak out. Of course, he had been governor of the biggest state in the union, but it was the credibility of his message, and his ‘end of big government’ ideas, that were very powerful with the electorate in 1980,” Domitrovic said.

“I think that any candidate who says there has to be a supply-side revolution in 2024, anyone who commits to that idea, will do very well with the voters. And I don’t think that correlates with economic credentials on the part of the candidate, it will correlate with the degree of credibility that the candidate has with respect to that message,” he added.

Domitrovic described an electorate that is fed up with slow growth, the rise of inflation, and all the related supply-chain problems that come with such woes.

“We have to have a very strong, growing economy, we can’t have a crazy budget deficit financed by the Federal Reserve, and we have to reawaken this industrial giant, as Reagan said in his 1981 inaugural address,” Domitrovic said.

The moment is ripe for a bold non-establishment figure, even or especially one with no political experience as a candidate for national political office, Domitrovic argued. Outsider campaigns during times of economic hardship have been highly successful in past decades, and the parallels do not end with Reagan.

“As a candidate, John F. Kennedy had no experience running in 1960, but he had credibility. He proposed tax reform, and a reduction in tax rates, which led to an immediate, nine-year period of economic growth beginning in 1961. Growth under President Eisenhower was 2.5 percent, and under Kennedy is immediately doubled to 5 percent,” Domitrovic said.

These examples are not lost on the American public, and in fact, have deep psychological resonance for many voters today, he argued. In Domitrovic’s view, experience as a Washington insider is not what the public will be looking for in 2024 and might actually be a liability for a candidate, given that the incumbent insiders, as Domitrovic put it, “can’t see the forest for the trees.”

“There’s extreme dubiousness on the part of the electorate with regard to anyone who seems to have made his career in Washington, in government. I think that some of the renegades from successful places in this country—Florida, for example—present a major successful counter-example, and that may resonate with the electorate,” Domitrovic said.

Here Domitrovic alluded to the track record of DeSantis, who, after keeping the state of Florida mostly open while other governors locked their states down during the pandemic, in March released positive figures for job growth and labor force participation in Florida. On DeSantis’s watch, unemployment stood at 3.2 percent, well under the national average, and more than 325,000 jobs were added in the year leading up to March 2022.

Americans weary of recession would like to see such phenomena at a national level, and are waiting for the candidate who fits the bill. Looking to 2024, Domitrovic returned to the example of Reagan.

“From 1976 to 1980, Reagan put his foot down and said, ‘We have to do something different, enact tax cuts,’ and that message resonated. It had no basis within his own policy experience, but his message was credible and he got votes each time he put forward that kind of message,” Domitrovic said.