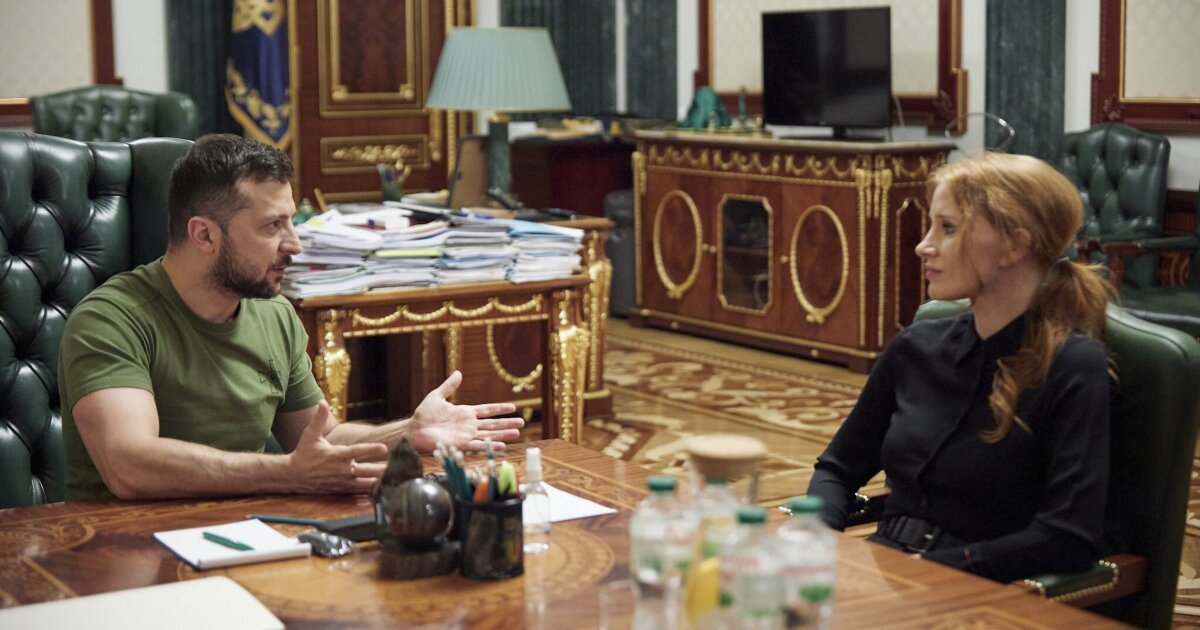 What do Bill Clinton and Oscar-winning actress Jessica Chastain have in common? They’ve both talked to Ukrainian President Volodymyr Zelensky this week as Ukrainian and Russian forces exchange blows at a critical juncture in the war.

“The United States helps us prevent Russia from freezing this conflict,” Zelensky told Clinton in a video conference, per remarks published Tuesday. “And this is exactly what Russia wants. We are well aware of what happens with ‘frozen conflicts.’ It stretches for years, for decades. We cannot allow that.”

Such a conversation might not seem strange for a former and current head of state given their mutual interest. The sight of a wartime leader hosting a steady stream of celebrities, or sitting for photo shoots with high-society glossy magazines, has drawn skepticism and even derision — but for Zelensky, it’s just another part of the war effort.

OVER 400 CIVILIANS IN BUCHA SHOT, TORTURED, OR BLUDGEONED: REPORT

“For us, such visits of famous people are extremely valuable,” he posted on social media in conjunction with the Zero Dark Thirty star’s visit. “Thanks to this, the world will hear, know and understand the truth about what is happening in our country even more. Thanks for the support!”

That’s not a one-man job, Zelensky’s team seems to think. A former comedian whose first introduction to American audiences was overshadowed by then-President Donald Trump and Rudy Giuliani’s attempt to find a corruption charge to damage then-candidate Joe Biden’s campaign, Zelensky’s reputation has soared in the months since Russian President Vladimir Putin began the attempt to overthrow him by force. His regular videos made him an international icon in the early months of the war, living proof of the Russian failure to seize Kyiv, and helped provoke a cascade of Western public support.

“That quick rallying behind Ukraine was very decisive for Ukrainian morale in the first week of the war because thinking in terms of being in a Ukrainian territorial guard unit, you’re sitting in a trench in Kyiv, and you’re facing all that Russian mass coming at you,” Janis Sarts, the director of NATO’s Strategic Communications Center of Excellence in Riga, Latvia, told the Washington Examiner in a recent interview.

That dynamic in the early weeks of the war underscored the strategic significance of social media companies in a modern war — a power that could prove dangerous if ever it were to be dominated by an authoritarian state such as Russia or China.

“This was the war that happened live on social media. … The scale and size and social media penetration in Ukraine was really one of a kind,” said Saris, a former senior Latvian defense official. “[Given] the way social media also has an impact on the way populations perceive a war, should we allow [just] any sort social media, with [just] any standards, be the information-exchange providers in a democracy?”

For Zelensky, the more immediate concern is how to keep the story fresh. And so his wife, first lady Olena Zelenska, has emerged as a high-profile surrogate. She denounced “Russia’s Hunger Games, hunting for peaceful people and peaceful cities of Ukraine” during an appeal for Congress to provide more weaponry and has appeared with her husband in Vogue and other international media.

“Millions read Vogue, and speaking to them directly was my duty. And that was an interesting experience,” she told the BBC. “First ladies have no political influence. But we have something else — an emotional impact. In particular, emotions sometimes provide for cooperation between countries no less than conventional diplomacy. Because when we understand and feel each other, we succeed much more.”

She offered that self-assessment in the days following a high-profile Summit of First Ladies and Gentlemen fundraiser. “It was a really, really smart move to bring her also in,” a senior European official said. “So you need to keep the audience somehow engaged. … Ukrainians are good in that sense, understanding that you need to bring other leaders in, especially the first lady.”

And as the dramatic struggle for the capital has given way to a grinding artillery battle, Zelensky has hosted other actors on the world stage, such as Ben Stiller and Angelina Jolie. Sean Penn is reportedly planning a documentary about the Russian invasion.

“It’s like a series with a guest star coming in,” the senior European official said while trying not to sound glib. “Although it’s not fair to compare it, but that’s the age we are living in, actually. We are living in a media age.”

It is as if Zelensky, who won the presidency after starring in a successful television comedy that satirized Ukrainian politics, plans to win the war in part by orchestrating an internationally acclaimed broadcast of the tragedies in Ukraine.

“He definitely has skills, and he has definitely a team, and that’s definitely his toolbox,” the senior European official said. “He’s using this toolbox he has in the best possible way, in the favor of his nation, actually, and the favor of the free world. … There were many people who didn’t take him seriously until the war started.”

Russian officials and state media figures, on the other hand, are counting on the threat of gas and food shortages this winter to dampen international support for Ukraine until Kyiv is forced to relinquish territory or settle into the “frozen conflict” that Zelensky fears.